So the open enrollment is going on with Obamacare, and I figured with all the hoopla I would look into it and see how bad things really are. I'm a technical guy, so I figure if I can't get a site to work then probably no one can. But, I live in Washington, so we don't use the HealthCare.gov site -- we have our own exchange just for the state of WA: www.wahealthplanfinder.org. Catchy name, isn't it? What follows is my journey into how NOT to do things if you're trying to sign up. I've snagged a bunch of images, grayed out names and dates, but otherwise this is what you'd experience if you follow the same steps. 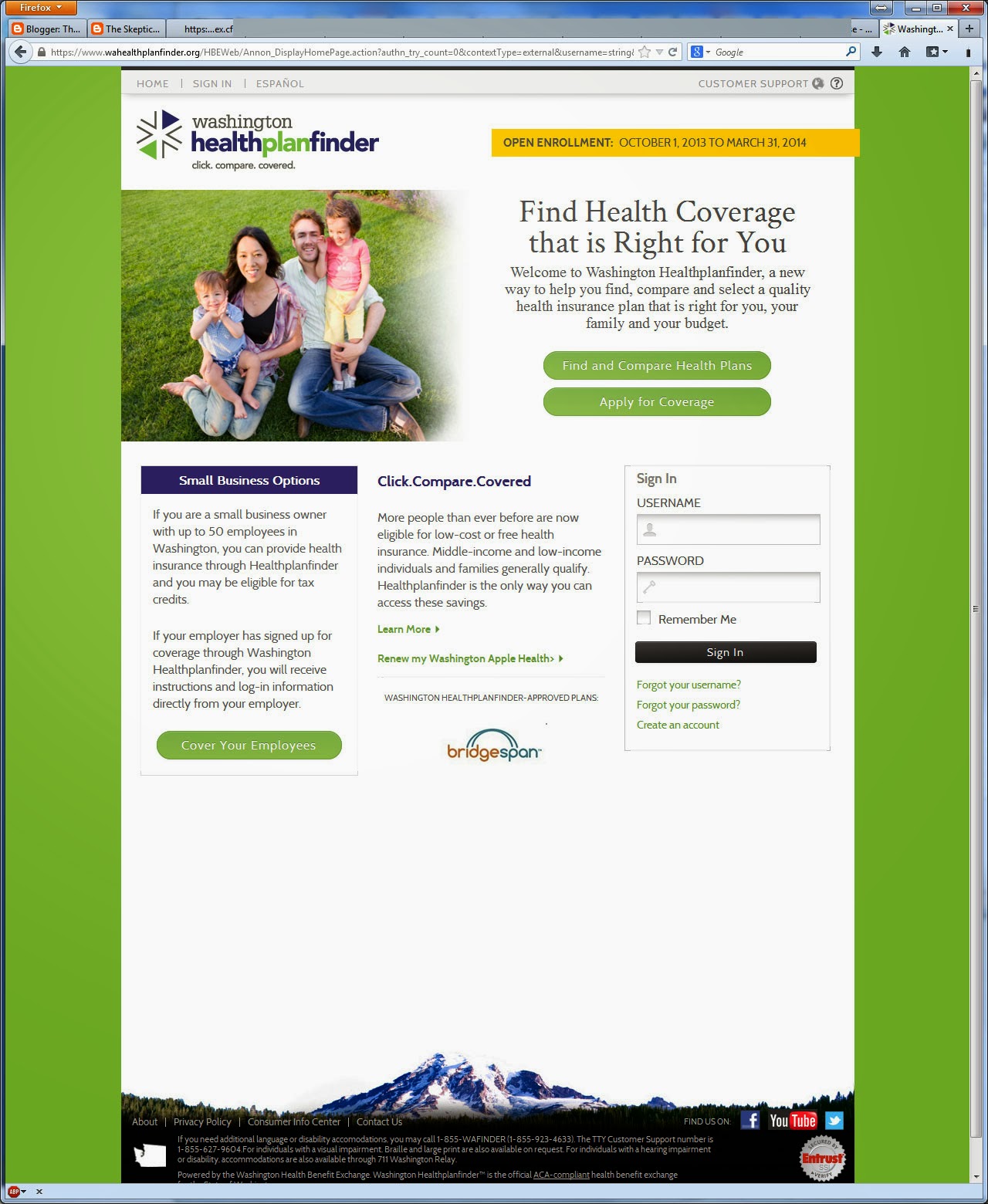 You start at the home page, and there are several large buttons calling for attention: Find and Compare Health Plans, Apply for Coverage, and in the bottom-right is the sign-in section. Naturally, first time users don't have an account yet, but there's an option down there: Create an account. Again, I'm a tech savvy person, so I figured I'd just jump right in and start with creating an account. This, it seems, was a terrible mistake. 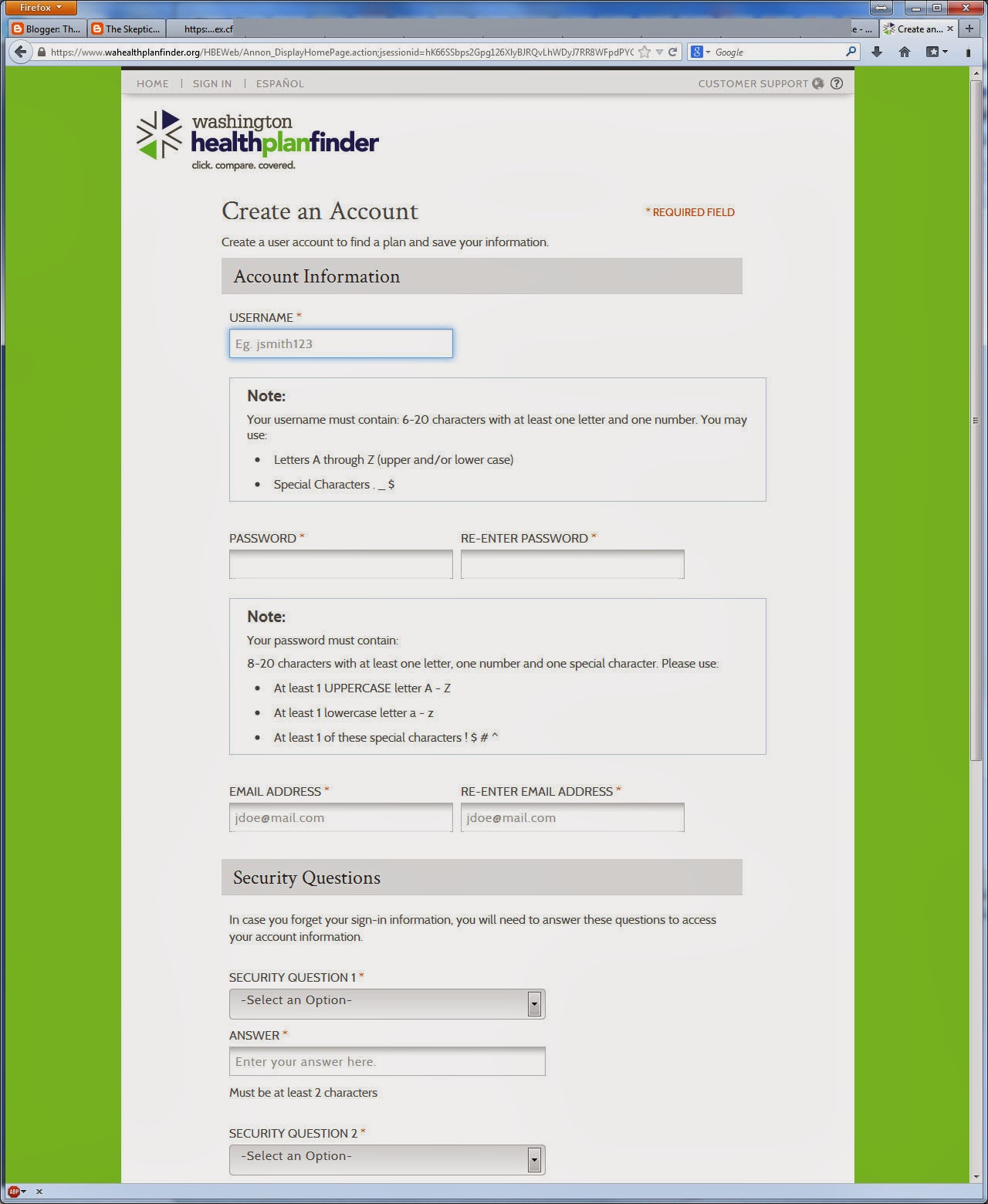 Creating an account was pretty straightforward -- choose a user name (it has to have at least six characters with one number and one letter, with a maximum length of 20 characters. The password requirement is a bit more strict: at least eight characters, 1 UPPERCASE letter, 1 lowercase letter, 1 number, and 1 special character. Enter your email address, pick and answer three security questions, agree to the Conditions of Use, and you're done. Ready to search for plans and apply for coverage now? TOO BAD! Here's what you get: 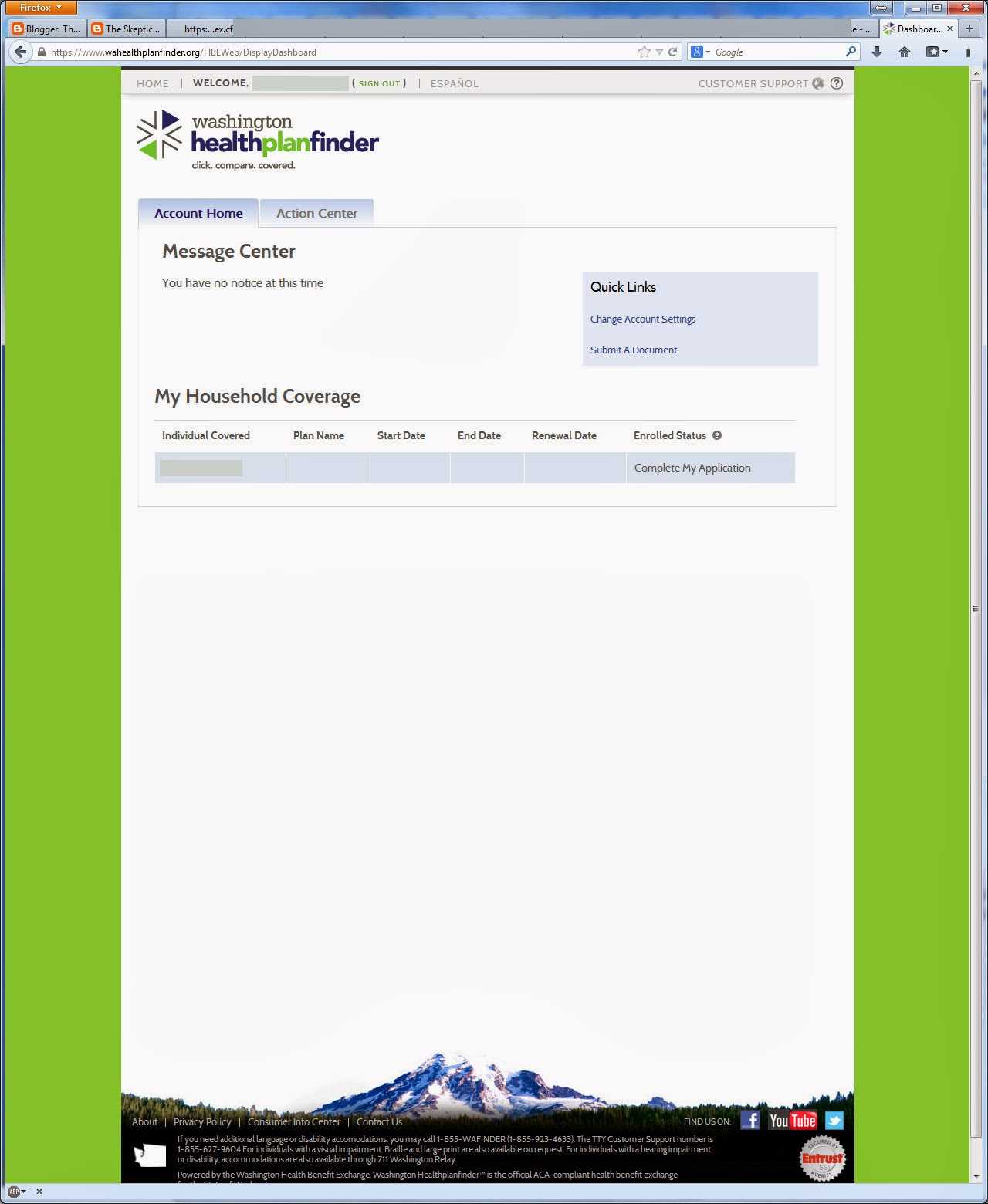 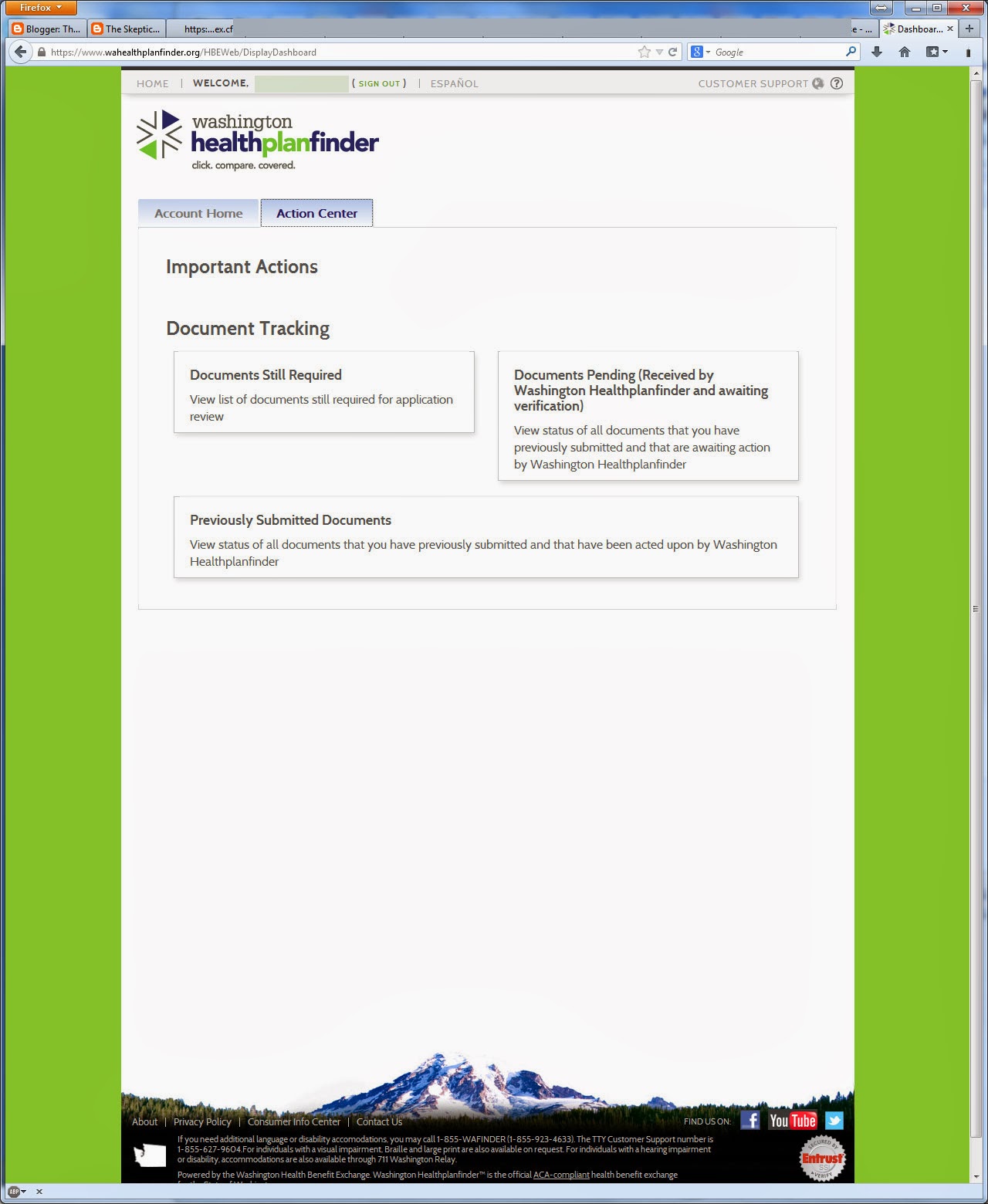 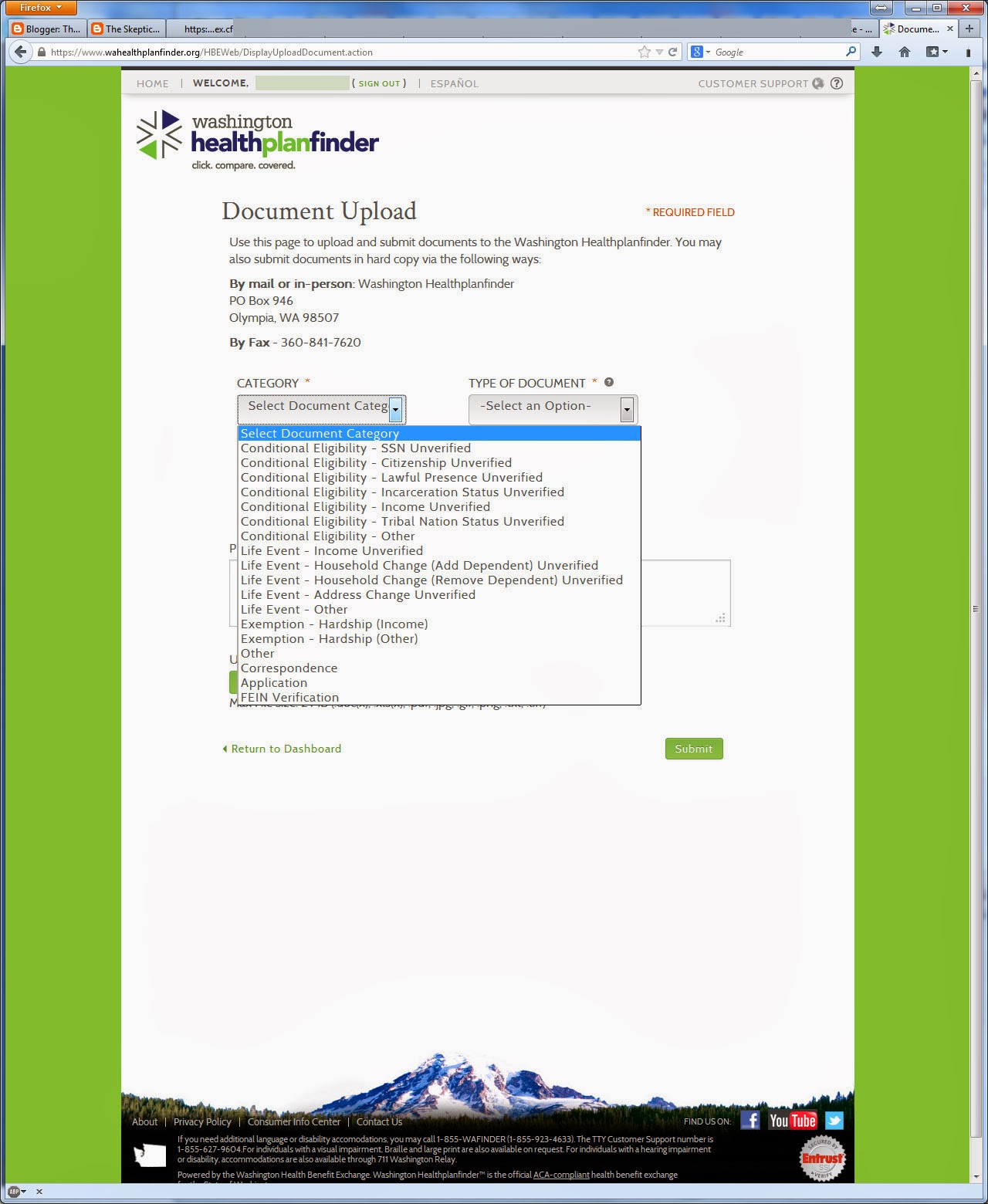 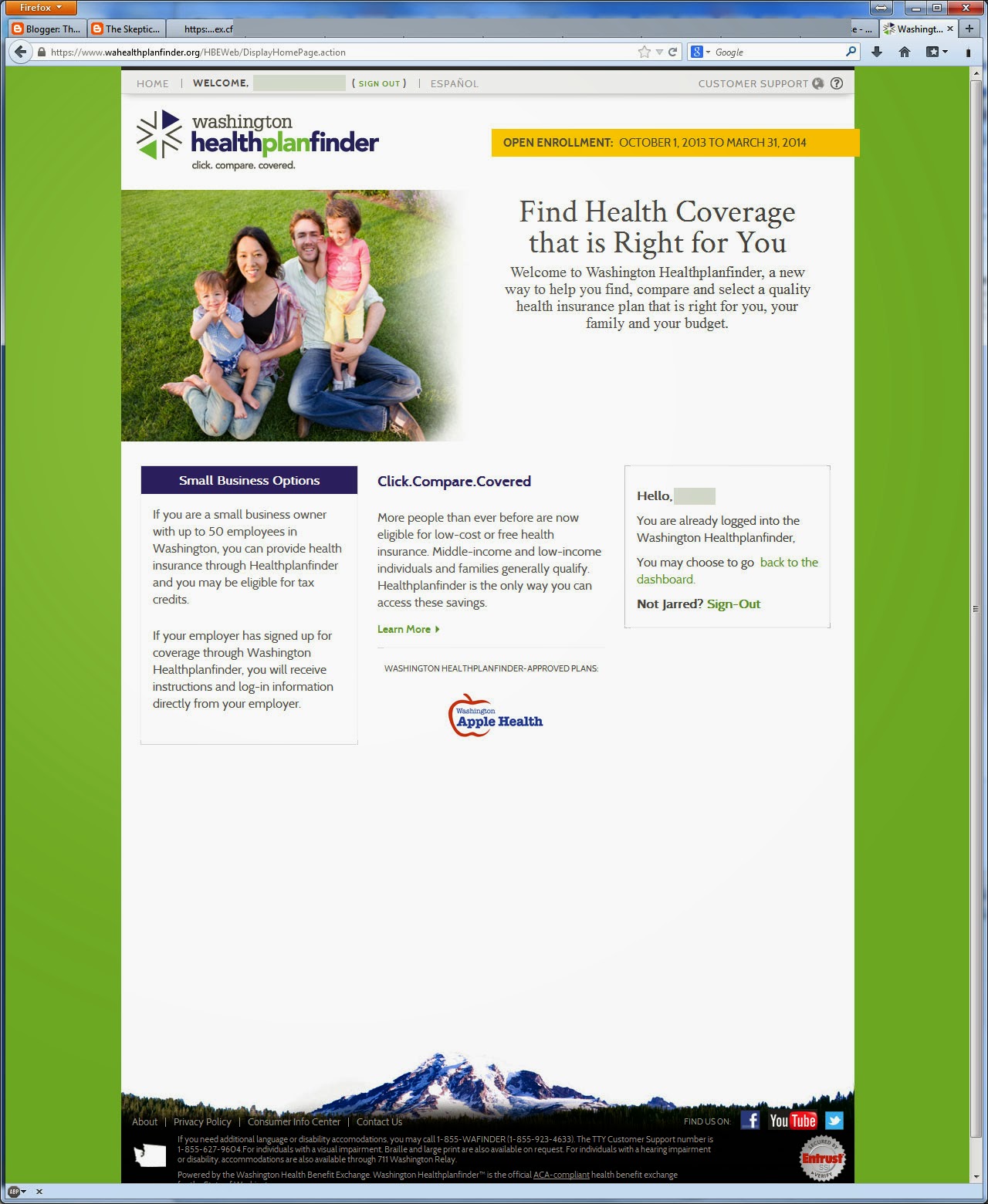 Hmmm...strange, there doesn't seem to be anything to do. Maybe it's under one of the other options on the site? Well, I checked around and it appears that's not the case. The home page in particular has now changed quite a bit, as all you can do is watch a tutorial video or go back to the useless dashboard. So that's a problem, but I thought after a bit maybe they just want me to search for a plan and then apply, so let's try that. 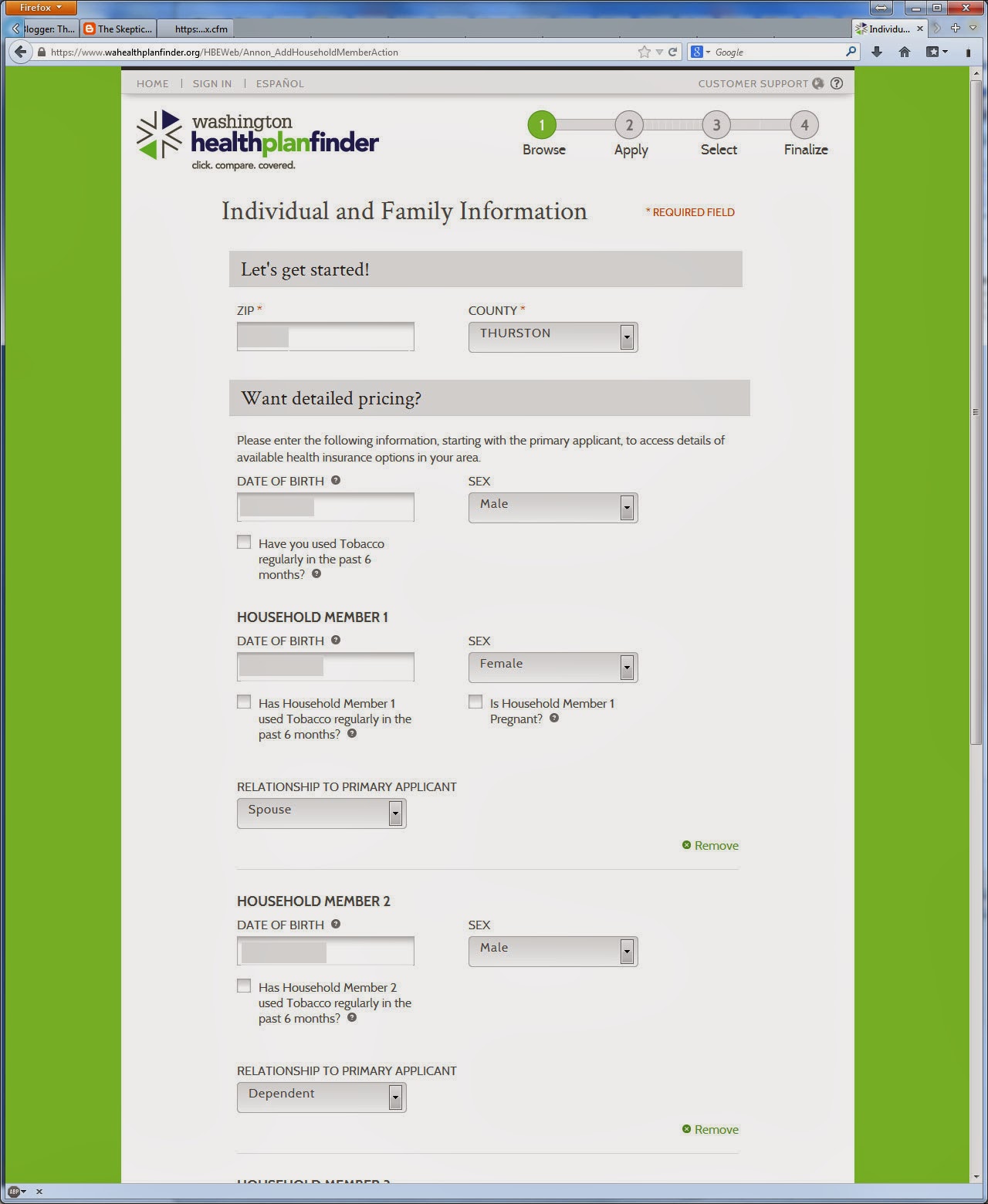 To find a plan at all, you need to first sign out -- which makes zero sense. Finding and comparing plans when you're lot signed in is easy enough, though -- give the site your zip code, birthdates and sex (and smoking/pregnant status if needed), add household members, and then input your household income. Search for plans, and in my case I get the following: 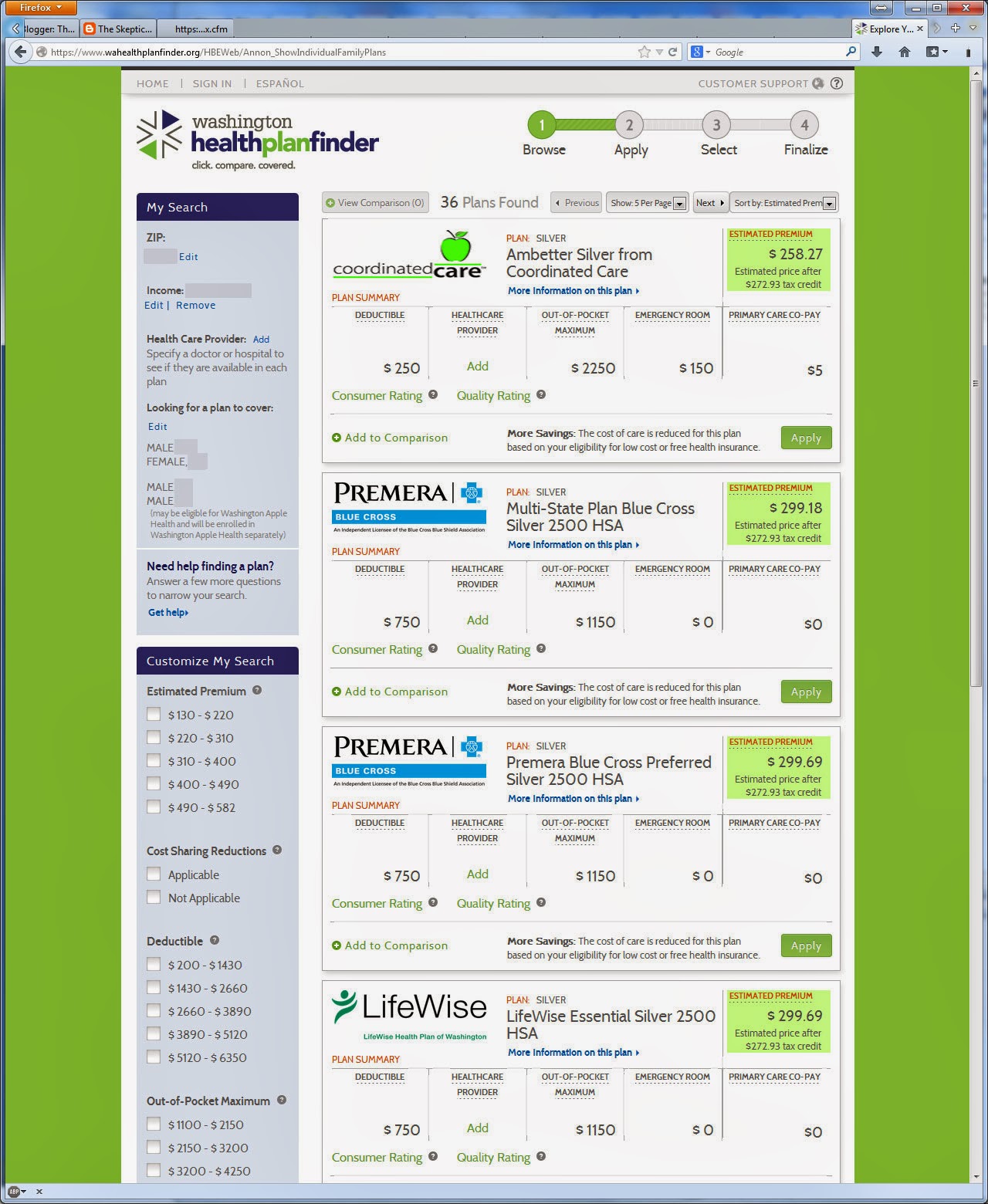 Huzzah! Check out all these plans! And with four people and a household income under $60K, there are some subsidies available (with higher subsidies for lower incomes). So far so good. Since my family is already with Group Health and we're okay with the care we've received there, let's just limit things to the Group Health options: 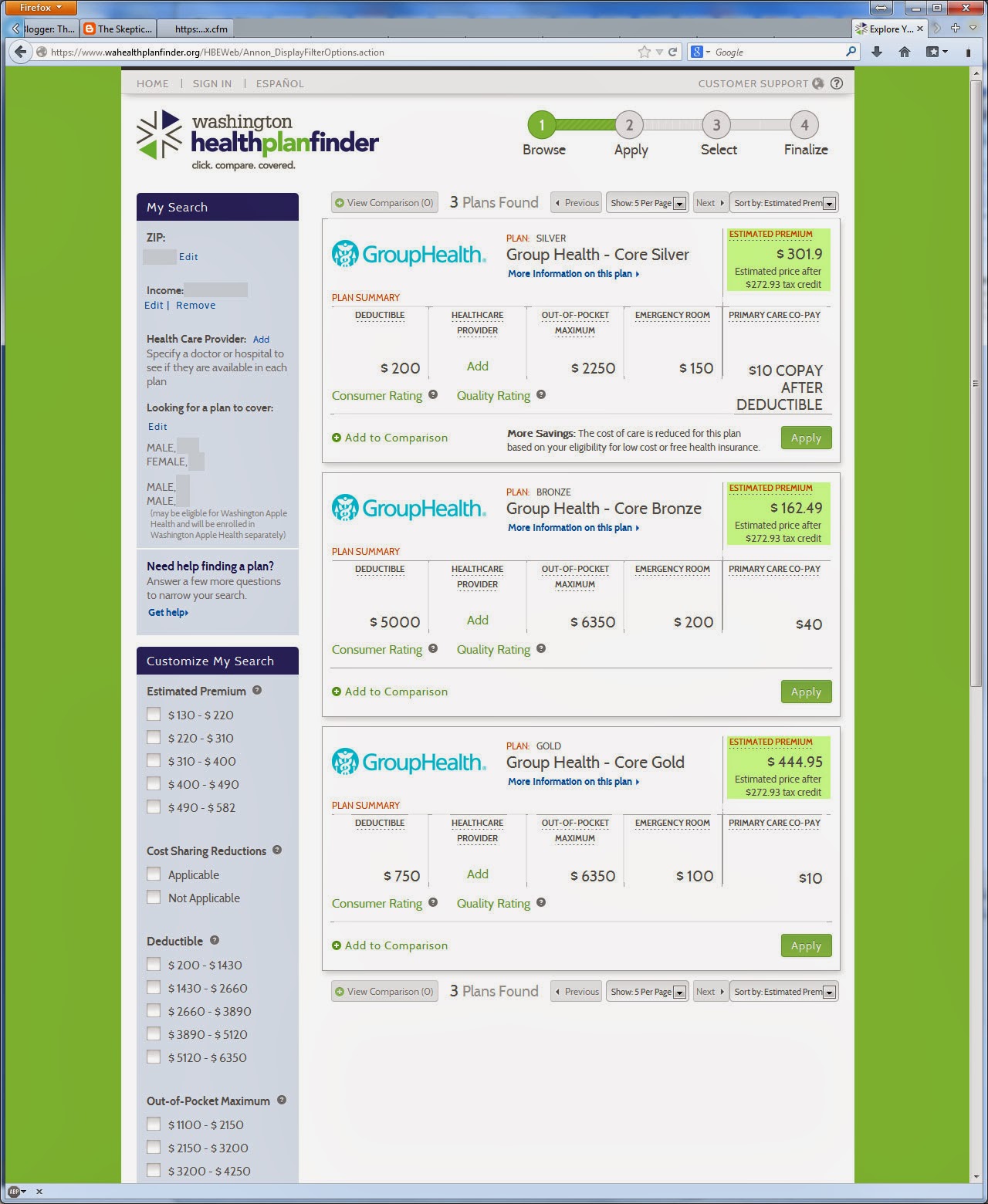 The Silver plan looks pretty good, so let's go ahead and apply for that.... 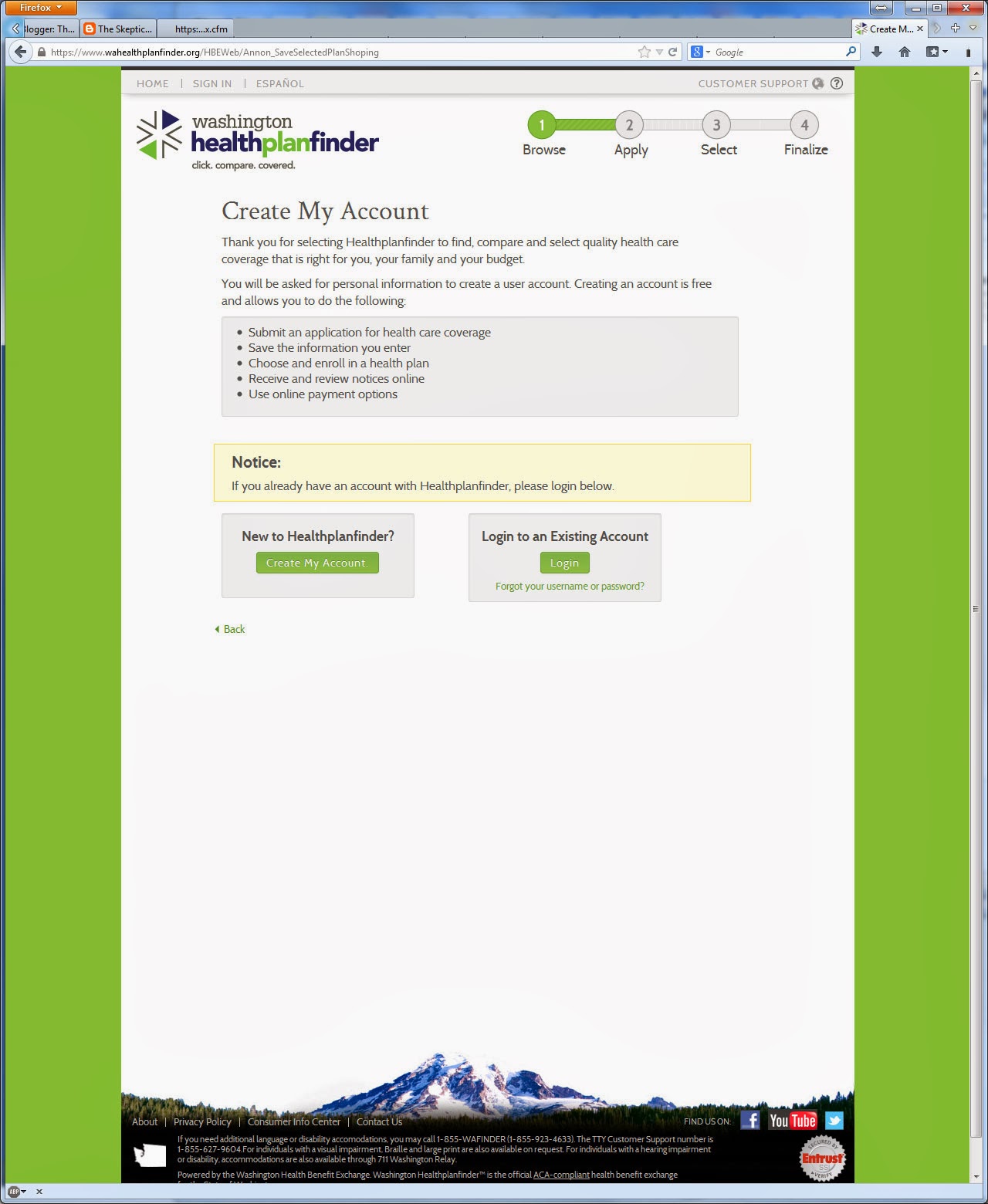 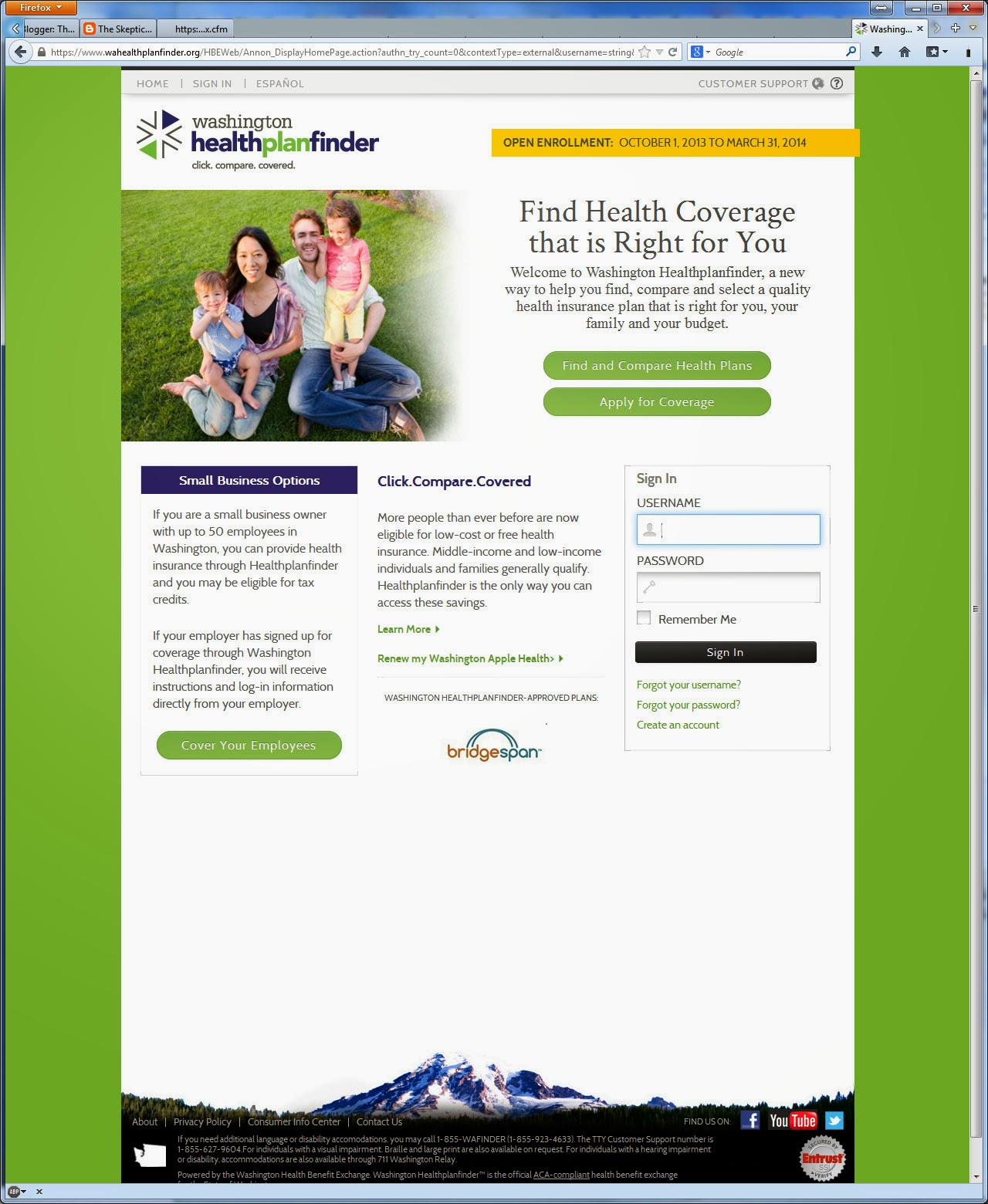 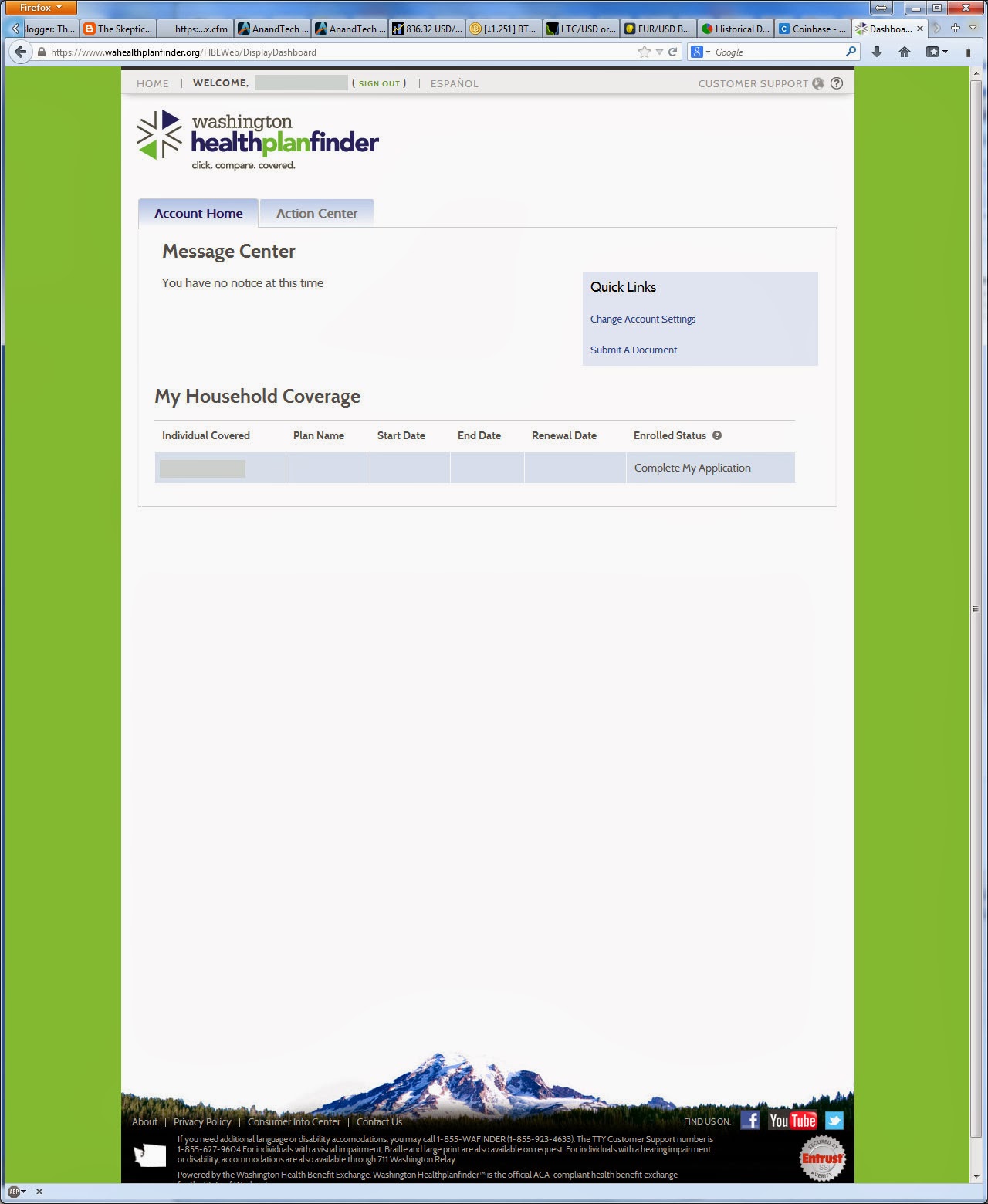 There are a few more pieces of information to tack on, however. First is that the "estimated price after tax credit" figures are apparently a joke -- you'll pay more than this unless you're on Medicaid, from what I've read elsewhere. And that's apparently assuming your application is even accepted, which it might not be -- if it was guaranteed, you wouldn't be applying, right? Of course, you have to go through the site if you want any chance at a tax credit; skip the exchange and you're stuck paying the full price no matter what.

My bet: even if I happen to qualify for a tax credit, it will likely end up being smoke and mirrors. If I get a $200 tax credit on my health insurance but my other federal taxes end up being $300 higher, it's a net loss of $100. And as I've mentioned before, with all of the people now guaranteed the ability to get some form of coverage (if you can't get accepted on an application, you can always go with the single provider government option), I suspect a tax rate hike is coming down the pipe.

I'll be trying to make some phone calls this week to see if I can get to the "apply" stage, which will likely require some serious time on hold. Wish me luck....
at 12:04 AM