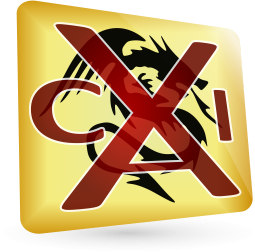 As I've mentioned, the current "short-term PoW stage transitioning into PoS" is all the rage. It started with Blackcoin, got cloned by Whitecoin, Asiacoin, Yellowcoin, Orangecoin, and probably a dozen or more others, and along the way several other coins that were formerly PoW-only decided to switch to PoS. One of the more interesting coins to do this is CAI, which is a Scrypt-N coin from the same team that helped to create Ultracoin.

The official change to PoS has already begun, and CAI (Caishencoin) has now officially become CAIx. Interestingly, if someone were really determined they could actually keep mining CAI and reject the wallet updates that halt mining and such, but I don't think there's enough impetus to make that happen. The reason I mention it however is that from the launch of CAI to the switch to CAIx, we've seen quite a few changes, so let's quickly cover them.

First, CAI launched with a maximum circulation of 28 million coins, to be distributed over a long period of time (similar to BTC, LTC, etc.). There was an IPO involved as well, with a premine of 2% used for the IPO as well as other bounties and marketing. (I think 1% went to the IPO, but I can't be sure as the original information has been deleted.) What that means is that the developers created a genesis block worth 560,000 CAI before releasing the coin to the general public. Now here's where things get interesting.

After about two weeks of mining, CAI was doing "okay" but not much was really happening. Then the developers announced their intention to transition CAI into a PoS coin, and the result was initially higher prices. The IPO price of CAI ended up being at most 0.0008 BTC per CAI (with earlier IPO investors paying less). Shortly after launch, CAI was trading at around 0.0003 BTC, then a week later it was 0.00055 BTC, and when they first announced their intention to take the coin PoS CAI was trading at 0.0007 BTC. It dropped from there back into the 0.0004-0.0005 BTC range over the coming weeks, and now that the move to CAIx is fully underway we have CAIx prices of...wait for it...0.00083 BTC (with short spikes to as much as 0.0011 BTC).

The results so far have been relatively minor in terms of price movement, but long-term any IPO investors basically went from holding around 1% of all CAI (28 million total) to potentially holding a much larger percentage of CAIx -- there's currently a 1-to-1 trade available at Coin-swap.net, so if you bought as an example 10% of the IPO coins and thus ended up with 0.1% of all potential CAI, you now have over 1% of all potential CAIx (depending on how long the PoS staking lasts) -- neat, isn't it? The developers are "still trying to determine the best way to use the remaining premine funds", so it will be interesting to see what they come up with. At least this is one case where the coin is clearly being actively developed, though, so they haven't simply taken the premine and disappeared, and I don't think they will.

Other initiatives to increase the value of CAI/CAIx include making games (e.g. Tiny Elementals is available for iOS and Android now), but I tried that game and frankly I can't see why anyone would spend money on it -- there are many better "free" games around. The developers are also involved with Ultracoin (UTC), so we might see a PoS transition there as well -- which might be for the best, as scrypt-jane seems to be going nowhere fast, and UTC in general is quickly fading into obscurity.

Lessons to be learned from this? I'm not really sure. Apparently pulling a "bait and switch" in the cryptocurrency world is simply par for the course. At least it's a step from an outright scam like the initial Asiacoin launch, and it's interesting to note that even Asiacoin is holding steady after the fixes were applied to nuke the 3.2 billion hidden AC premine. In the meantime, if you're holding CAI (like I was), you'll want to exchange that -- for free -- to CAIx sooner rather than later. I believe there's a two week window before the Coin-swap exchange goes away, and at that point I suspect that any remaining CAI will be largely worthless -- so unless you want to collect them as a souvenir, act now.
at 4:48 PM