Piggycoin 2.0: How Far Can a Good Wallet Take You?

I'm not going to do a full deep dive on Piggycoin right now, but Piggycoin has so many similarities to other coins that I felt it was worht a discussion at least. You see, recently the original PIG was converted into PIGGY (at 1:1 trading), switching from Scrypt PoW to X11 with Proof of Stake. CAI/CAIx basically pioneered this sort of "bait and switch", and it worked... well, it more or less worked, but CAIx isn't exactly the hottest cryptocurrency right now. (DRK or XMR on the other hand...but those are topics I cover in my newsletter so I won't spoil them here.) Anyway, here are the quick specs for the two versions of Piggycoin, starting with the initial release:


Note that the block explorers for PIG may shut down in the future. Also, the block reward was changed at one point, but then it appears it changed back, as blocks 62500 through 62827 have a reward of 0. My guess is there's a group of users that want to stay on the original PIG, but I don't see it going anywhere as all of the exchanges have converted to PIGGY. Anyway, the original design seemed a bit...lacking, and the code was changed a few times in the early going, so when it was altered most felt it was for the best. Here's the new version.


Honestly, there's still not a whole lot that would make me look at PIGGY and say, "Wow! There's a coin that's going places!" But here's the thing: they've done a decent amount of work on the GUI wallet to make it more useful, and they also have an Android wallet app, as an added bonus. So how much is that worth? I have no idea really, but right now the price of around 30 satoshi seems rather low. I mean, DOGE doesn't have much going for it these days and there are already 83+ billion DOGE, each worth twice as much as a PIGGY. 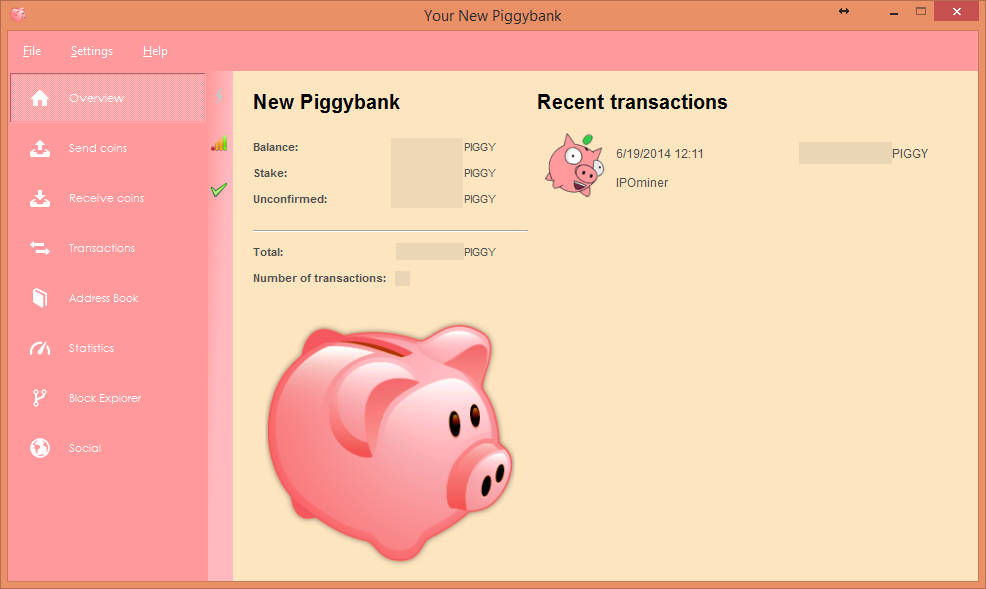 And let's not forget the cute piggy bank. Will this coin really teach children anything about investing? Probably not, but I figure I can keep my PIGGY and earn 15% per year -- as long as the network keeps going. When my two year old enters college in 16 years, I will have about ten times as many PIGGY as I do right now. Which means if I currently have the equivalent of about 0.066 BTC of PIGGY, the $40 I "save" today could be worth a whopping $400 in sixteen years. Good luck finding a college that costs less than that! There's also the Piggycoin Foundation, which is undertaking charitable goals. Right now they're gathering PIGGY to buy bikes, but what that usually means is they take PIGGY, convert it to BTC, then convert that to fiat, and then donate the fiat.

Let's just hope that the price doesn't collapse -- and perhaps even goes up. And let's hope the network keeps going. And let's also hope the exchanges keep accepting PIGGY and don't forget about it as hundreds of new coins flood the network. Need I go on?

In truth, my outlook for PIGGY isn't too promising. Other than the improved wallet (see above), there's little to differentiate it from all the other PoW->PoS coins. 15% is at least a decent interest rate, but there's a very real chance the price of PIGGY will fall more than 15% per year. Restarting as a new coin also doesn't lend me confidence in the developers -- will Piggycoin 3.0 switch to a new PoW algorithm in a few more months? Let's hope not!

What I'd like to see from PIGGY right now is a better integrated ABE-styble block explorer, that shows difficulty, block reward, value, transactions, etc. instead of just some raw hashes. And if you really want to take things to the next level, integrate a way for users to trade PIGGY for BTC directly in the wallet -- have an internal exchange that runs on top of the network and doesn't require any intermediaries! That would be sweet, though I'm not sure how you tie that in to BTC exactly, and more likely than not you'd have hackers compromise the network at least a few times before everything worked properly.

Anyway, good luck my little PIGGY -- I expect big things of you, and we'll see if my children are actually able to use you when they hit college in 15 or so years. And if you'd like to donate to their PIGGY college fund, I promise I won't move the coins anywhere: pWf3PEfPuxRwed5dNtutrWndUZckXYdP8r


If you like reading these blog posts but don't want to subscribe to my thrice-weekly newsletter, please consider making purchases through my Amazon Affiliate links!
at 4:32 PM