I discussed GAW Miners in the last post, and I mentioned buying two of their Scrypt miners -- specifically, I purchased two of the Lightning X6 Zeusminer ASICs, rated at 40-42MH/s each. There's a 24-hour activation guarantee, and in my case it took around six hours or so before the miners were available. Since I didn't have access to the actual mining interface before, I couldn't say precisely how the setup and mining worked, but now that my ASICs are live I can shed some additional light on the subject. Let's start from the top, though.

First, GAW Miners naturally accepts Bitcoin as a payment method; it's seems like a no-brainer, but it's still worth pointing out. Their prices are based on the current sell rate at Coinbase.com, which is more than fair in my book, and you have 10 minutes after electing to pay via BTC to complete the order. They also accept major credit cards if you prefer that method of payment, though I'm not sure if they charge the same amount or not.

Anyway, I mentioned the coupons at the end of the last post, and in case you missed it, there's a $10 off coupon for orders of $150 or more there's a $25 off coupon GAW25, which gives you $25 off orders over $200. The next coupon is for 3% off orders of $3000, which is a lot of money to spend. Since I wanted two of the $800 ASICs, I did the smart thing and placed two separate orders, getting $25 off each order, which actually works out to a 3.125% discount. [Update: The GAW25 coupon has been discontinued, probably thanks to guys like me.]

Incidentally, the other Scrypt miners that are currently available are all substantially more expensive compared to the Lightning X6. The War Machine for example is 54MH for $1075, which works out to $19.91 per MH (after the $25 off coupon); by comparison the Lightning X6 is $18.90 per MH. More importantly, for the extra 32% increase in hashing rate that the War Machine offers, it requires 84% more power. The net result is that you pay more per MH and you pay more for power, so you're less likely to earn a profit long-term.

If you want another comparison, the Innosilicon ASICs are currently the best efficiency offered by GAW Miners, but you pay through the nose for the improvements. Consider the A2 Innosilicon model, which provides 80+ MH while using 630W. That's about three times the efficiency of the Lightning X6, but even with the 3% discount code you're paying roughly $43 per MH -- more the twice the price per MH! Where you might hit ROI in 2-3 months with the Lightning X6, you're looking at 4-6 months to hit ROI with the A2. And that's why I bought two of the Lightning X6 ASICs instead of one of the other options.

After the order goes through, though, you're probably wondering how the actual cloud mining works. First, it's again worth pointing out that GAW will ship your ASIC to you at any time if that's what you want, but as I noted before they're basically only charging $0.10 per kWh for power, cooling, and networking and you don't have a noisy ASIC in your house, so unless you have really cheap power it's likely more effective to keep the ASIC at the cloud hosting service -- and you get a free month of hosting regardless, so remember to factor that into the cost as well (basically $72 of power is going to be used by the Lightning X6 in a month).

Anyway, once your ASIC purchase goes through, you get a code for Zenminer that lets you activate your ASIC. You'll need to create an account at Zenminer first, at which point you can input the activation code. Do that in about five seconds later you're presented with control of the new ASIC. It looks like this: 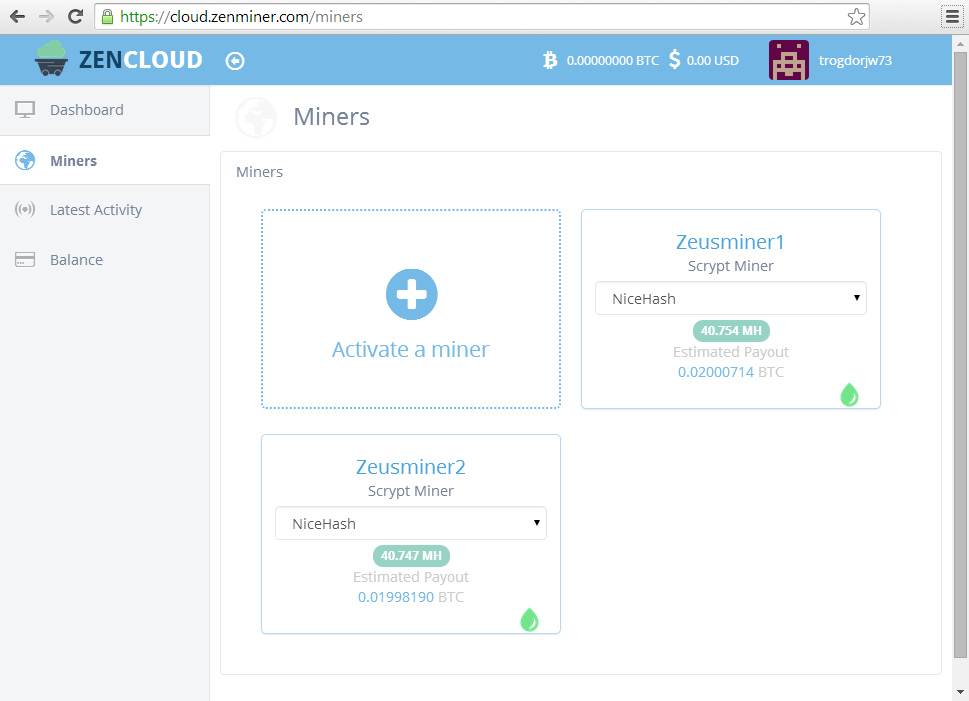 You can see that I have two ASICs, both doing 40-42MH, and I've pointed them both at Nicehash. Right now, the choice for Scrypt pools consists of six options: Coinking, Clevermining, Multipool.us, Nicehash, TradeMyBit, and Wafflepool -- straight LTC mining isn't even an option. I'm sure you can already guess which of those I think is best, but feel free to check out PoolPicker for a second opinion. This is one of the things that you might find a bit surprising: there is very limited control over where your ASIC is hashing. Now you might say that's because GAW has done the research for you and feels your best bet is to mine at one of a few selected pools, but if you were hoping to try mining the latest Scrypt alt-coins you're going to be disappointed -- or you're going to need your ASIC shipped to you.

And really, that's all there is to it. You get paid (into your Zencloud account) once per day, I believe around 11PM Eastern US time. Right now my estimated returns are around 0.04BTC per day, or $23.60 per day. If I manage to maintain that exact rate (which is unlikely), I will break even in about 66 days, though it's worth noting that the 14 day average rate for Scrypt mining at Nicehash would actually put me at 0.056 BTC per day -- or break even in 47 days. This is about as close to a "sure thing" as I've ever seen in the world of Cryptocurrencies, so if you're tired of GPU mining I'd give GAW Miners serious consideration -- and you international folks that pay the equivalent of $0.30 per kWh can finally join in on the fun again.
at 1:05 PM