This is actually pretty huge, and I'm not just trying to build up hype, but starting today (whether this is a permanent offer or only something temporary isn't clear), GAW Miners is allowing you to upgrade your ASICs to Hashlets. SHA256 ASICs become Genesis Hashlets, while get this: Scrypt ASICs don't just become any old Hashlet; you get Hashlet Primes (Hashlets Prime?)! What that means for me is that I'm now out of the ASIC market and am now pure Hashlets, but where I used to have just Zen Hashlets I'm not the proud owner of 84MH worth of Hashlets Prime.

This is super cool as it opens up the ability for me to play with the recently launched Hashlet Prime features. Wait, you hadn't heard about those? Oh, that's right: I haven't covered them yet! Well, there's a lot more to cover than I have space for here, because I want to talk about the ASIC upgrades, so if you can't wait go ahead and read Josh's post and I'll provide analysis later.

The short of it is that Hashlet Prime now has the ability to mine two pools for 12 hours each day -- you get to select the second pool -- which means you can play it safe by splitting your hash rate among two pools rather than having all your eggs in one basket (*cough* Zen Pool *cough*). You can also boost the speed of your Hashlet Prime by 50% for some 30 minutes twice per day. There are some other features coming soon to Hashlet Prime as well, but they're not here yet.

Okay, let's get back to talking about this deal of converting ASICs into Hashlet Prime. First, you obviously need to have a hosted ASIC for this to work, and right now other than Hashlets the only Zen Hosted ASIC available from GAW Miners is the Zeusminer Thunder X6. That's a $450 ASIC that will do 18-20MH, so compared to, say, a Zen Hashlet it's not exactly a great deal (at best it's $22.50 per MH, at worst it's $25 per MH). It does include one month of free hosted mining, though, after which you pay $1.10 per day ($0.061 per MH). 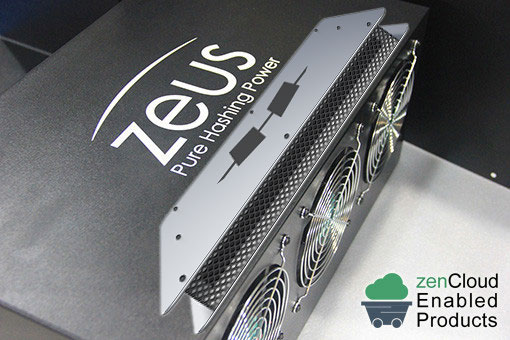 Here's the kicker: you can convert that sucker into a Hashlet Prime basically immediately after purchase. [See Update below!] Yes, you give up the month of free hosting, but you gain the extra options like Double Dipping, HashBoost, and other upcoming features. So how does this all pan out? For a straight Hashlet Prime of 18-20 MH, you pay $450 and you can earn about 0.0119 BTC per day after using HashBoost twice daily (0.008 BTC after maintenance fees), compared to 0.0115 BTC per day if you keep the Thunder X6 as a regular ASIC for the first month, and 0.0085 BTC going forward. So that's ROI in 140 days with a Hashlet Prime compared to ROI in about 122 days as a Zeusminer Thunder X6 ASIC.

The thing is, HashBoost isn't all that great as I understand it. The new Double Dipping feature seems like it may effectively double your hash rate for 12 hours, though this isn't entirely clear; do you earn full hash rate payouts at two pools at once, or does it split your hash rate between two pools? If the feature does in fact give you hashing at two pools for the price of one, then the daily income right now mining Zen Pool and LTC Pool via Double Dipping is around 0.0133 BTC per day with a Hashlet Prime, which means ROI is only 85 days! (I've enabled Double Dipping on my new Hashlets Prime, so I'll report back tomorrow with the results.)

Another option is you could just try selling your new Hashlet Prime for 80% of the going rate: $40 per MH. So potentially you can pay less than $25 per MH and then try to sell it for $40 per MH. I'm not sure if there are many Hashlet Prime buyers right now, but it's an interesting loophole you could try using. Except there's a catch: the Hash Market is only for Legendary Hashlets and Hashlet Solo right now, so you have to hold on to your Hashlet Prime for a bit longer.

I suspect one of two things will happen. One is that this current loophole will be closed post-haste. Considering Hashlet Prime was originally a $14.95 Hashlet it's not like GAW doesn't make money regardless, so this isn't necessarily going to happen. The second option -- and what I think is far more likely -- is that we'll see the remaining supply of the hosted ASICs dry up in the next 12-24 hours. 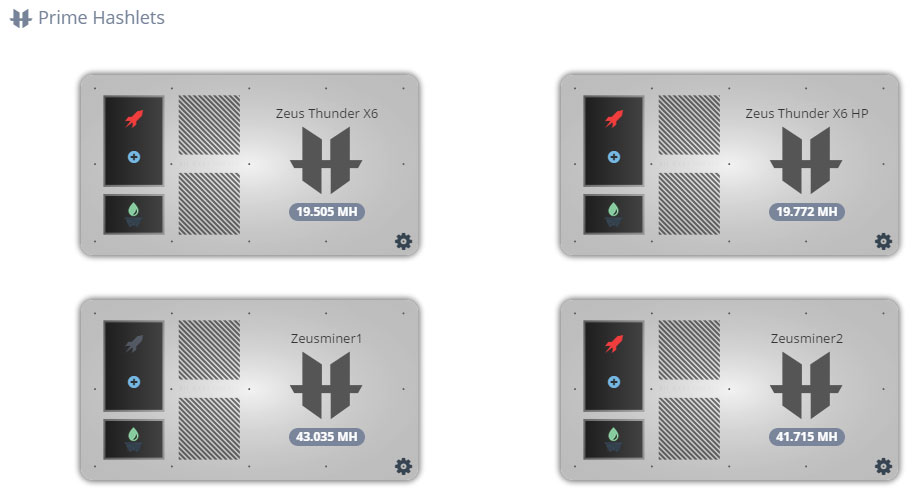 And if you're wondering, yes, I just bought several Zeusminer Thunder X6 ASICs; with this post going up we will probably see the rest of those ASICs vanish. You've been warned -- better act fast as this is the last chance you're likely to get at $22.50 per MH for Hashlet Prime.

UPDATE: The "loophole" has apparently been plugged, so buying ASICs to convert to Hashlet Prime may no longer work. (I'm not going to try it any longer, at any rate.) It's also possible that some orders may be refunded, though we'll have to see on that end.

UPDATE #2: Roughly one week later, my orders (and presumably all orders of new ASICs that were converted into Hashlet Prime) have been canceled. I received email messages saying I was "refunded", but let's be clear: I HAVE NOT BEEN REFUNDED. GAW received my Bitcoin, they activated them on Zenminer, I converted them into Hashlet Prime -- all using the interface they provided. This is not an exploit; it's something they allowed. Now they canceled my miner purchases and Prime conversions, but they did not return my Bitcoins. I opened a ticket on 9/29; three days later the ticket hasn't even received a response (though I did get banned from Hashtalk.org).
at 11:18 PM