The past day has been rather eventful in the world of PayCoin. GAW's CEO earlier mentioned that they were looking into ways to get people access to money for next week prior to the PayBase launch. Part of the issue with PayBase is that it will need to conform to anti-money laundering regulations and Know Your Customer (KYC) laws, so before you can buy or sell PayCoin using dollars (or some other form of fiat currency) you need to get verified. None of this is particularly new or surprising, and it's the right way of doing things -- and hopefully we won't see any fiascoes like what happened with MtGox. But it takes time to get verifies, which means that if you have to wait weeks or even longer then you can't access the PayCoins you currently own.

The solution was simple enough: GAW distributed PayCoins to all of their HashPoint users on the ZenMiner cloud today. So if you had 4000 HashPoints as of this morning, they've been converted into XPY at the promised ration of 400 HashPoints per XPY. Considering many users have been accumulating thousands of HashPoints over the past month or so, you'd expect there to be a potential run on the exchanges as people try to get out before the crash, and that's precisely what happened... 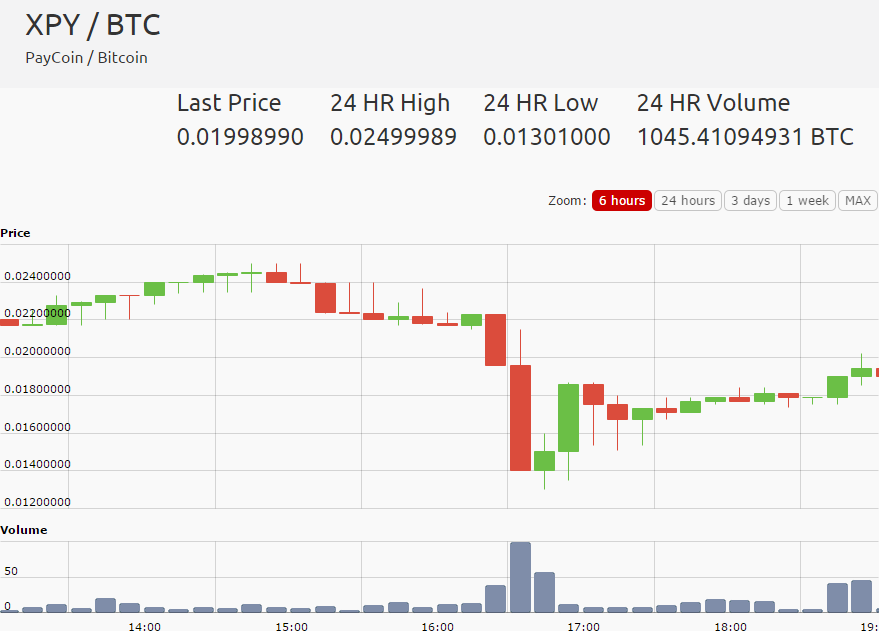 The price did recover, but it's still sort of "iffy", but then Bitcoin isn't doing much better right now so the two are almost certainly related. Moving on and related to this, Cryptsy has now opened trading for XPY, it seems with the help of GAW. Cryptsy tends to be a much larger market than Coin-swap, so we may see more people involved (and almost certainly some attempts to manipulate the market). The prices for XPY at Cryptsy are currently higher than Coin-swap (0.0162 vs. 0.018), so there's some potential arbitration opportunities, but things are volatile enough that if you want to play that game you probably don't need to move coins between exchanges.

Of course if you're bullish on PayCoin this represents probably the last opportunity to get in at under $10 per XPY (maybe). GAW in the past has said that they will have a price floor of $20 per XPY, which if they had to buy every XPY would mean a market cap of roughly $250 million at launch. Statements made more recently by GAW_CEO  however indicate that the $20 floor may be more of a medium-term goal rather than something that will happen right at launch. For example, here Josh states, "...while we all wait for Paybase to launch and for us to start bringing in the $20 floor over time." On the other hand, elsewhere he has said, "Paybase will purchase Paycoins for $20 each." I guess we'll find out next week if that's really true.

There are some other interesting tidbits that aren't really important, but I notice GAW has started calling it PayCoin instead of Paycoin. They also have a new video (Life Costs Money) to try and get across their marketing message for PayCoin, which is pretty impressive -- this isn't the sort of video you can cook up in a few hours, so they definitely have invested resources into the marketing. GAW's CEO also pointed out that he's learned his lesson about pre-announcing features, so the current PayCoin is not the final PayCoin, basically, and there's a bunch of other stuff being worked on. Nothing new there I guess.

Finally, the last major item of interest is the subject of PayBase verification of your identity -- the KYC stuff mentioned earlier. This is also related to that $20 PayBase price floor, as we'll see in a moment. Like most places (e.g. Coinbase), PayBase will have a tiered system of verification. Initially there will be five tiers, with different levels of verification required.

Tier one let's anyone buy XPY using BTC, but there's nothing really noteworthy there. If you only want to buy a bit of PayCoin with fiat currency, you just need to link a credit card or bank account, which will let you buy up to $10,000 of XPY (which is way more than I ever plan on buying); more importantly, this will also allow you to purchase up to $500 worth of BTC with XPY per week. The next tier requires verification using public records, and that bumps your weekly limits up $2500 BTC (purchased with XPY), or buying $25K of XPY with fiat. The final main tier requires verification with two forms of government ID and an account that's active for more than 30 days, at which point you can buy a ton of XPY with fiat ($75K), and you can sell up to $5K of XPY for fiat. There's  VIP tier as well, which is basically for the rich and famous.

Here's where the $20 floor comes into play. Best-case, people can sell at most $2500 worth of XPY for BTC per week for the next 30 days. And of course PayBase can slow that down even further by taking more time to do verifications. After all, if you're not verified you can't sell any XPY on PayBase, and if you've only had a credit card or back account verified you're limited to $500 per week. So, with that in mind I suspect PayBase can easily buy back as many XPY at $20 each (in BTC) as verified users are allowed to sell. If GAW decides they will only buy $1 million worth in the first week (50,000 XPY at $20), all they need to do is only verify bank and credit card accounts for 2000 people. And considering that each verification could take a few days and might require some manual effort on the part of a PayBase employee, I'd say 2000 people per week is actually sounding pretty ambitious.

I've verified my account at Coinbase, and prior to that MtGox and a couple other places. It's nothing too surprising, but if you want all your transactions to be hidden from government oversight then this isn't what you want to see. The problem as GAW points out is that getting mainstream acceptance of PayCoin (or any other cryptocurrency) basically requires you to get on the right side of the law, so that's what they're doing. Maybe in the future we can shift away from a government controlled monetary system, but for now that's not going to happen.

Of course there's one issue right now: PayBase isn't yet live so no one can get verified I guess. So get in the queue early come Monday, but GAW did say they will prioritize existing customers over newly registered users. All told, with 12.5 million XPY "in the wild" (with likely half still sitting with GAW), plus the verifications limitations, I don't expect there to be a massive run on XPY in the near future. Rather, I'm more inclined to think it will take most of us a week or more to get verified at PayBase, and the higher the verification level the longer it's likely to take. Long-term, XPY still has a lot of cool features going for it and hopefully GAW can deliver, but like most things in cryptocurrency this is by no means a "sure thing".
at 1:51 AM