Repairing and Replacing the Nexus 5 Screen

Anyone who has ever owned a smartphone knows the horror that strikes when you drop your phone. The split second as the phone goes air-born and falls towards the ground elongates, your muscles refuse to respond fast enough, and you watch in despair as your $400 piece of electronics falls towards the hard ground. Sometimes it lands on the back and you breath a sigh of relief; other times it lands on the glass but you get lucky. But unless you buy a good case, you will almost certainly eventually end up with something that looks like this:
Depending on your smartphone, the difficulty of fixing the display after such a fall varies. In the case of the Nexus 5, unfortunately, the Gorilla Glass is bonded to the digitizer and LCD beneath, and while it's in theory possible to replace just the glass, in practice that can take hours and result in a less than ideal result. After researching the process of trying to repair just the broken glass, and finding a lengthy video documenting the process (which required more than a few specialized tools), I did the sensible thing and ordered a complete screen and case assembly.


I actually checked out the various screens on Amazon and found many sounded like generic "compatible" displays that might not work quite right. That led me to eTradeSupply, which promised true OEM parts. The display and a few tools ended up costing $85. That seems a bit steep for a smartphone that's about 18 months old, you might think it best to simply buy a new phone, but then my phone had 32GB storage and frankly most of the newer phones aren't that much faster/better. Used and working Nexus 5 phones still run $225+, and that's for the 16GB model, so repairing my phone seemed the best bet. What follows is some pictures and commentary on the process, should anyone else want to follow my path.

Step one is to pry off the back of the case, which I did with the above plastic part (also from eTradeSupply) that looks a lot like a guitar pick. It's not too difficult, but you do want to be careful to not break any of the plastic clips. A few minutes later and going around the seam a few times and the case comes apart.

If you look at the back of the case, you can see that there's actually a bit of sticky tape to hold the casing together, which helps make taking the case apart a bit more difficult. The vibration motor is on the rear of the case as well, but since I'm not replacing the cover I left it there.

The next step is to pull off the covers at the top and bottom of the phone. The bottom cover has four small screws and with those removed it comes off with little effort. 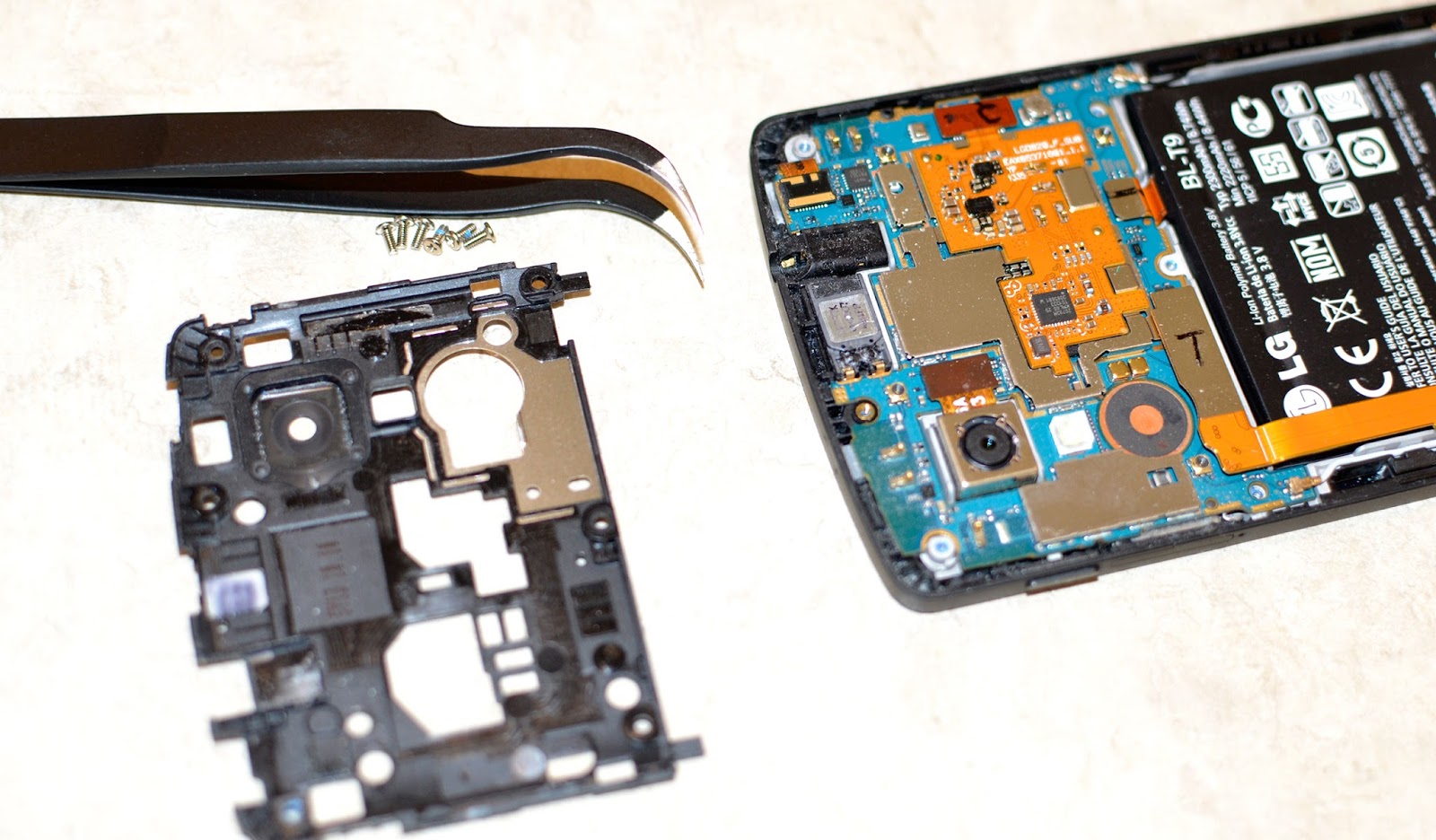 The top cover has six additional screws and also pops off with only a bit of effort. Keep everything together for the reassembly process. 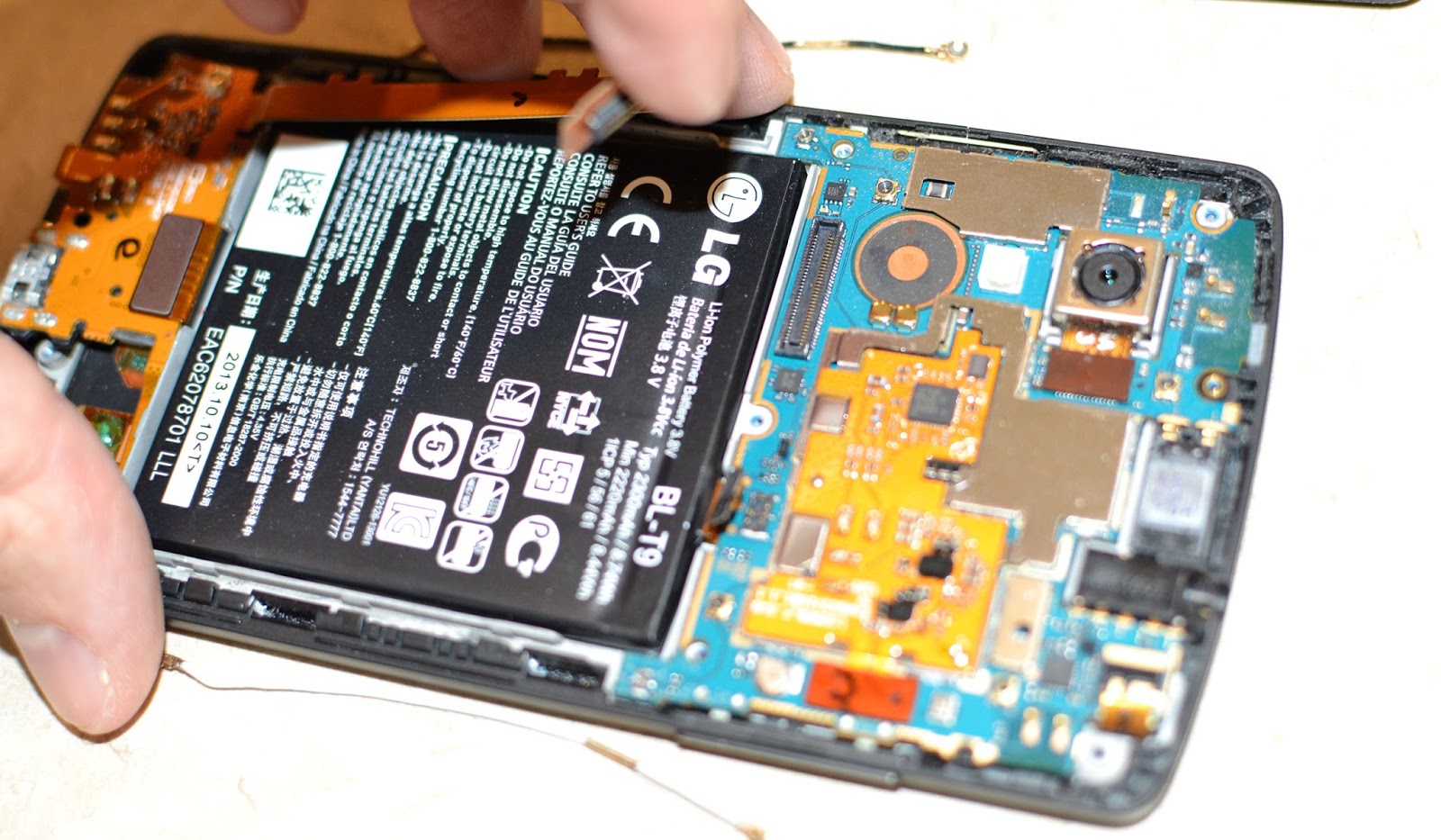 Next step is to remove the battery, but to do that you need to uncouple the battery as well as the cable the goes across it. I used the same plastic piece to pry both off.

Removing the battery is actually one of the more difficult things to accomplish, as it's secured with sticky tape to the chassis. I tried the plastic tab first, but that didn't do much other than bend the plastic. I eventually used the hooked tweezers that you'll see below to get it out. 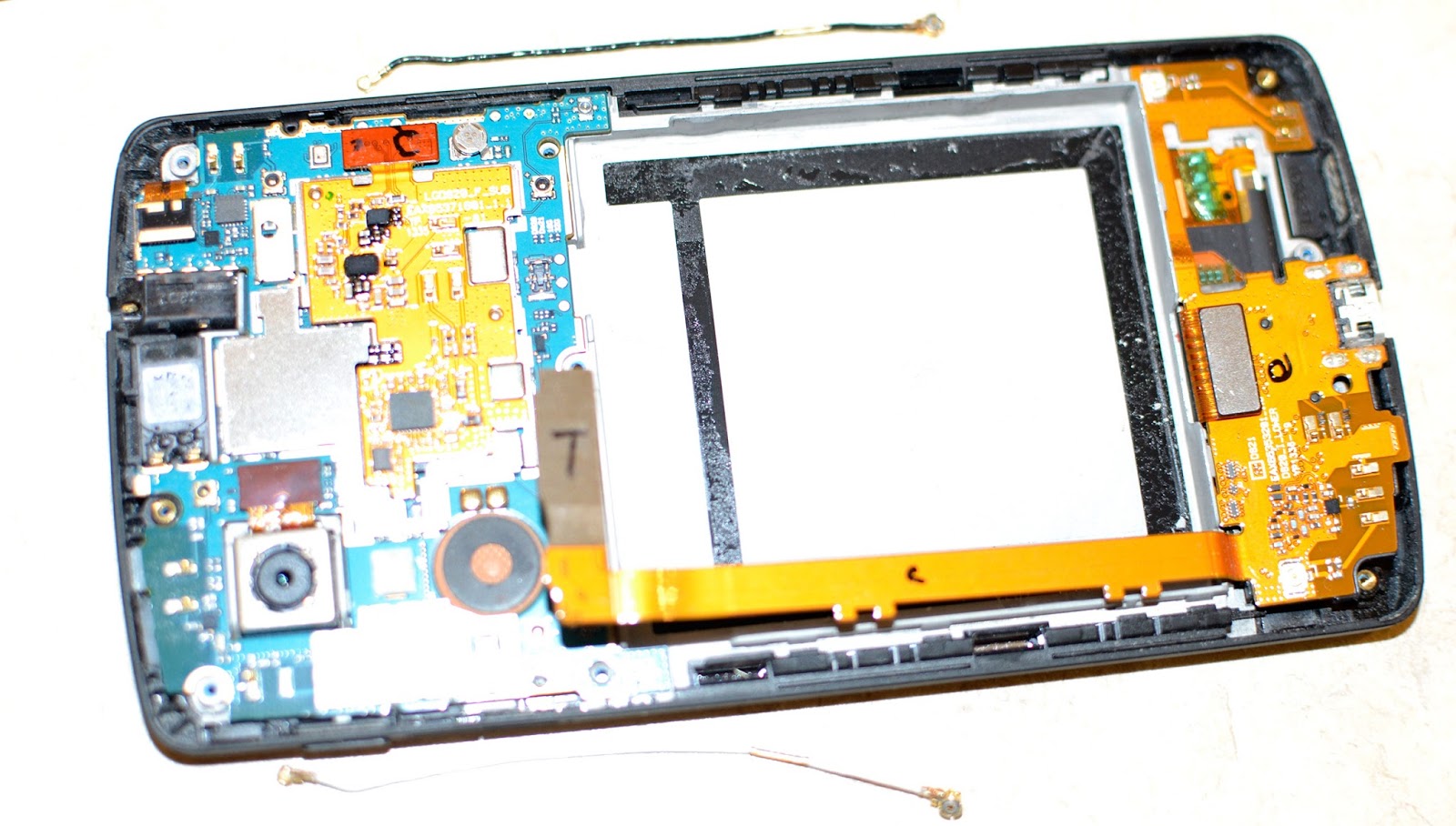 Here's what the case looks like with the battery removed.

The next step is to uncouple the connector to the bottom board and charging circuit. The decoupling is easy enough, but actually getting it all the way off is quite a bit more difficult. The top-right corner is glued (sticky taped) down, and I used the hooked tweezer tips again. Follow the thin connecting part and carefully pry it up.

Before removing the top circuit board, first you need to decouple the two cameras. You won't remove them yet (that comes next), but they hold the board in place along with some additional sticky tape. It doesn't take too much work to get it off, though. 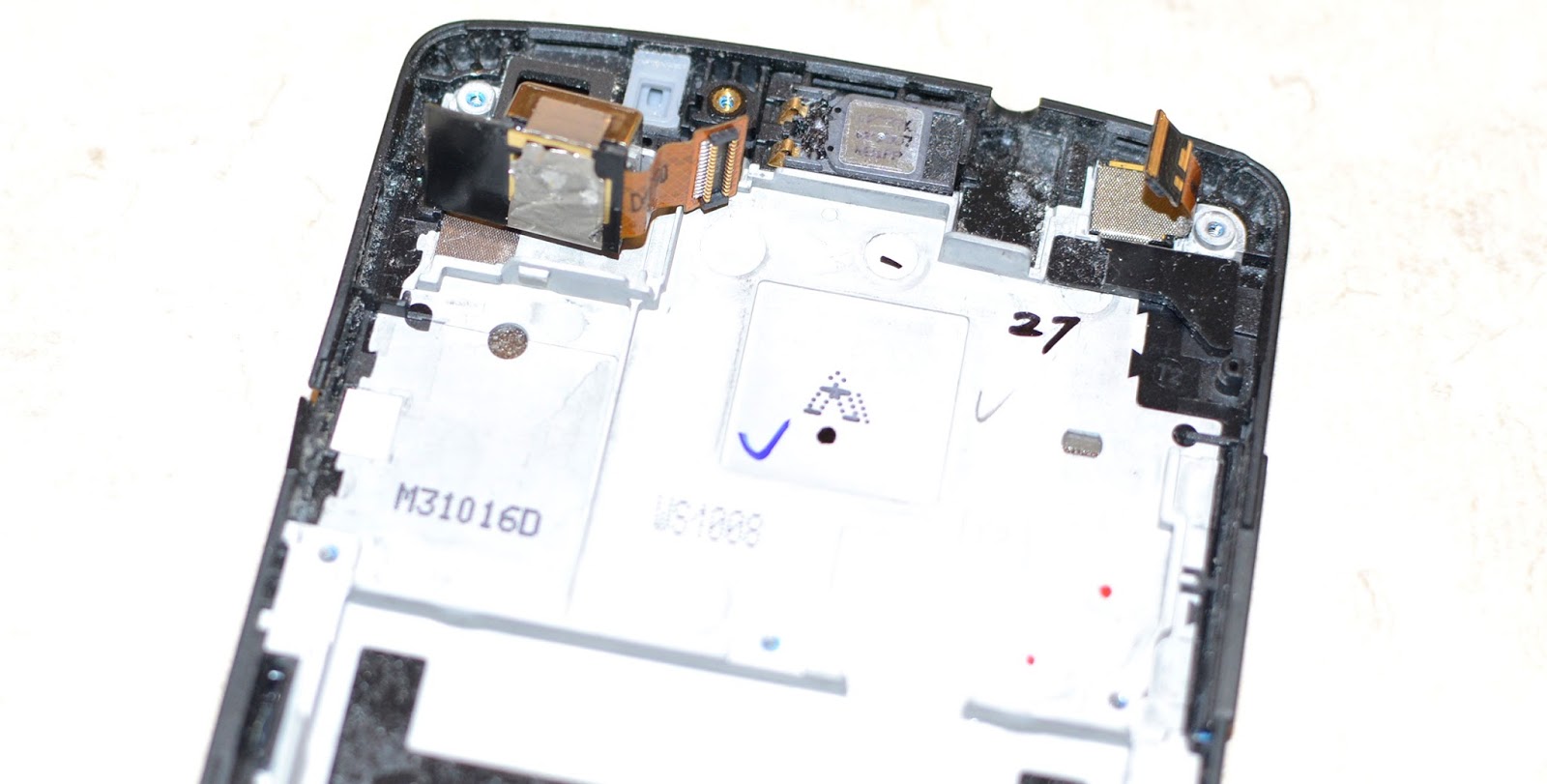 Next comes the two cameras, which are both glued down with sticky tape. Again, the thin and durable tips of the hooked tweezers did the job, though I bent some plastic pieces first. The rear-facing camera comes first, which was by far the more difficult piece to remove. Some of the sticky tape stayed on the casing and I used the tweezers to recover that as well so it could be used when reassembling the phone.

For the front-facing camera, there's a rubber piece of sticky tape to pry off first... 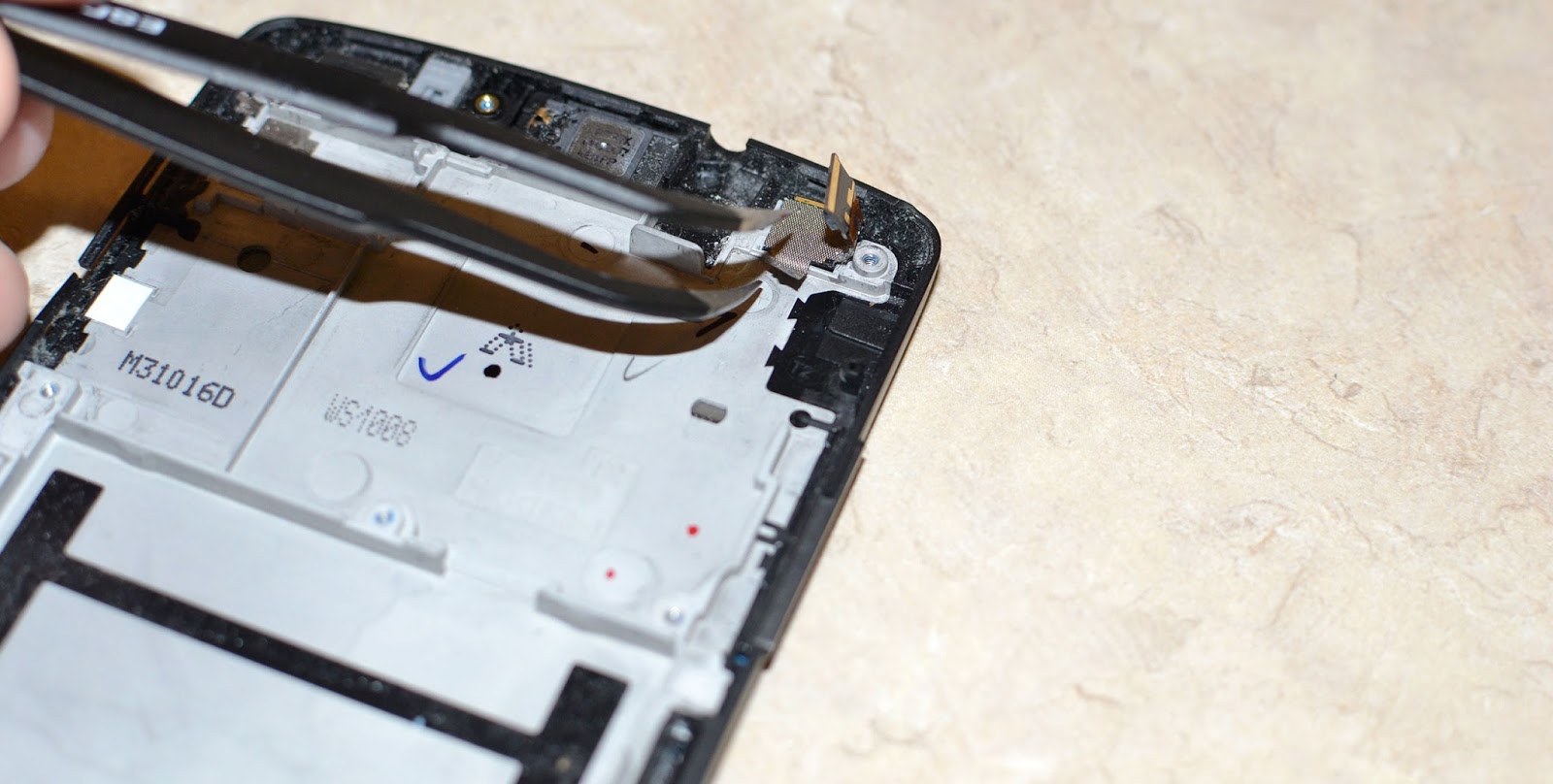 ...And then you can pry off additional sticky tape to get the front-facing camera. Again, you'll want to be careful as the tape will be used in the reassembly process. There are some additional sticky pads to transfer to the new case as well.

The last part to remove is the speaker, which is again secured with sticky tape and can be a bit difficult to get out. The speaker in my phone came off and left a rubber grommet in the case, which I then pulled out. There's another rubber grommet to its left that you'll also need to transfer. And at this point, you're all done with the disassembly. Don't forget to transfer over the power and volume buttons as well.

Now you just need to -- carefully -- reverse the above process with the new case and display. It goes faster than the dismantling process, requiring about 15 minutes compared to the 30-45 minutes to take things apart. 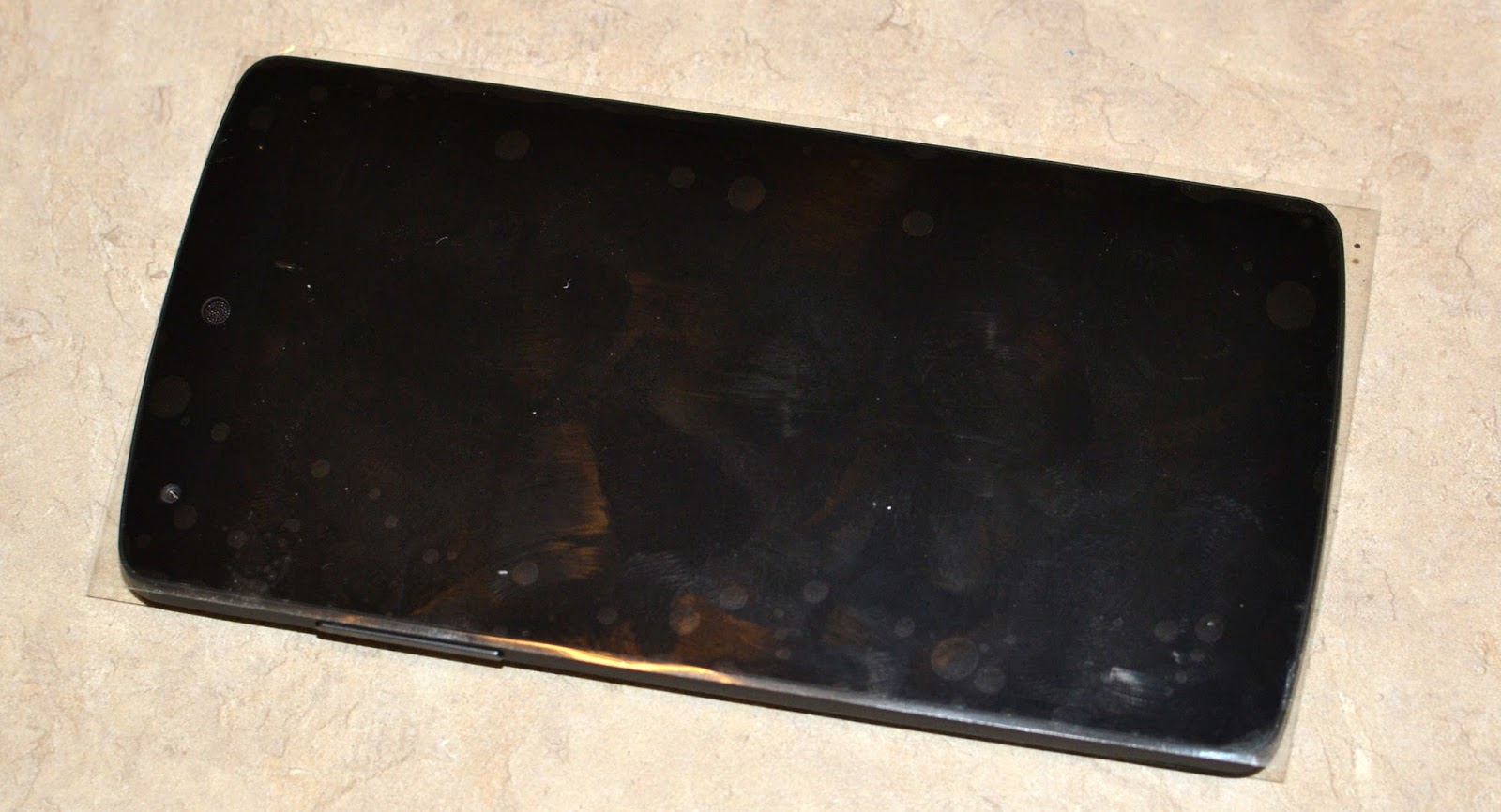 And when everything is said and done, I have a shiny new display. And the good news is that everything works great, and there were no blemishes or other oddities to report.

Now, wrapping things up let me just say this: modern smartphones are both a blessing and a curse. If you want a display that doesn't have as much internal reflections (i.e. glare), you want a bonded display. But if you get a bonded display like in most high-end smartphones, any shattered glass basically means you have to replace the entire display. It can be done, but where new glass might only cost $10 or so, a new display will set you back $80+. If you buy a protection plan, that can save your bacon as well, but the cost is often high enough to make people balk.

Your best bet is to be careful, but even the most careful person can occasionally make a mistake. A good protective case is helpful when that happens, but it means your sleek little smartphone is now much larger. Seriously, have you seen all the people with iPhones sporting huge cases? Apple making the new models slightly thinner is basically stupid for anyone that uses a protective case, and the same applies to Samsung, LG, Nexus, Motorola, etc. phones. If you buy any phone that costs more than $200, I'd say a case is a requirement, at which point thinness just became mostly meaningless.
at 3:23 PM