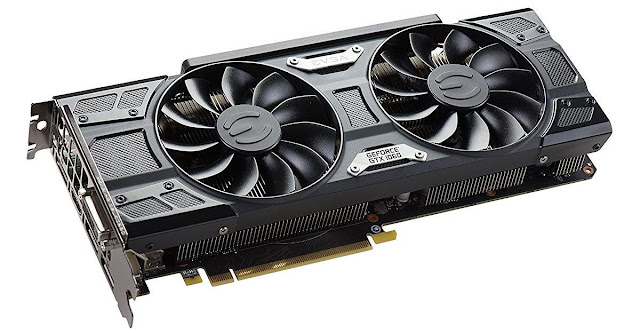 Continuing through the current crop of graphics cards, the GeForce GTX 1060 6GB is an interesting 'value proposition' card for Nvidia miners. It's relatively low power, though the EVGA model I have still includes an 8-pin power connector. That can actually be a good thing for people using PCIe risers, since it means the card will draw nearly all of its power from the PEG connector and not from the x16 PCIe slot. Trust me, you don't want to try pulling 75W over the PCIe slot when you're using Molex or SATA power connectors!

In practice, I find the 1060 6GB is reasonably fast, but there are better cards for the money -- the RX 570 and RX 580 being the main competition. Still, there are algorithms where the 1060 does better, and it does use a bit less power (and thus runs quieter/cooler). Here's a snapshot of performance, using a Ryzen 5 1600X testbed with the EVGA GTX 1060 SSC.

Something else that's nice about Nvidia cards is that you usually don't have to fiddle as much to get them up and running at good performance values, and you can easily tweak clocks and performance with utilities like MSI Afterburner. (I like to set the cards to 90 percent power target to keep them running cooler.)

If you're looking to put together 6-GPU mining rigs, you could safely run the 1060 cards with a 1000W PSU, which is a bit easier to find than the 1200W and higher models I recommend from some of the other builds. EVGA's 1000W T2 is a great Titanium rated power supply with a 10-year warranty -- sure to outlast your GPUs for mining purposes!

And that's why building a 'budget' mining rigs isn't as effective as building rigs with the fastest GPUs.
at 7:57 PM