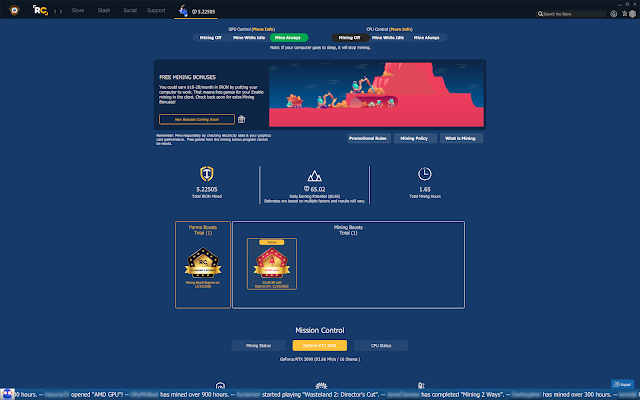 There are scamcoins, and then there are coins that are basically a scam. RobotCache and it's Iron (IRON) coins fall firmly in the latter camp. They appear to be legit, but the value is a complete joke. It doesn't matter how much hardware you throw at the problem: you're going to get ripped off. I've run a few tests, though, so let's just cut straight to the chase.

The big claim of RobotCache is that you can buy games with no exclusives, and that you can earn 'free' stuff. And by stuff, we're talking about games. If you enable mining in the client, your PC will happily donate spare compute cycles for both your GPU and CPU to the mining of Iron. It's basically like Ethereum, except not actually worth anything.

Bottom line: RobotCache is hoping to prey on innocent victims. I can just imagine some young gamer using his home PC and leaving it mining while idle. Even with an extreme GPU and CPU, it would take over two months to earn enough Iron to purchase a full priced game. Right now for example, RobotCache estimates 119 days of mining to earn enough Iron to purchase Wasteland 3. So, after four months of mining, and a cost of $130 or so in power, you'd earn a $60 game.

Except, the math is wrong. Yes, you read the correctly: RobotCache is lying on the math! Because the "~119 days" isn't based on your actual PC hardware. I don't know where they pulled that number from. (Actually, I do: it's from "Current Wallet Balance and Avg User Earnings" — suggesting there are a hell of a lot of gullible users of this software!) The reality is with a 3090 you'd actually earn 22 Iron per day (being generous and rounding up), and you need 5999 Iron to buy Wasteland 3. That means it would actually take 273 days, and a cost of about $0.85 per day. Your 'free' game thus ends up costing over $230.

Or maybe not? I still don't know where the Iron per day estimate comes from, but it's all over the place. Just watching while I wrote this post, I've seen it as low as ~12 Iron per day and as high as ~110 Iron per day. The screenshot after about 45 minutes of mining shows an estimate of 65 Iron per day. That's almost enough to break even prospect on power cost vs. game cost. But it's also one fourth what you'd make from mining Ethereum.

Also, just a parting thought: Consumer GPUs aren't really designed for 24/7 operation at 100% load. I've done it in the past, and I've killed off a lot of graphics cards. Some cards only lasted about six months before the fans failed, while others would last about two years. Neither one represents a good return on investment, unless you get the hardware for free and get free (or very cheap) power to run it.