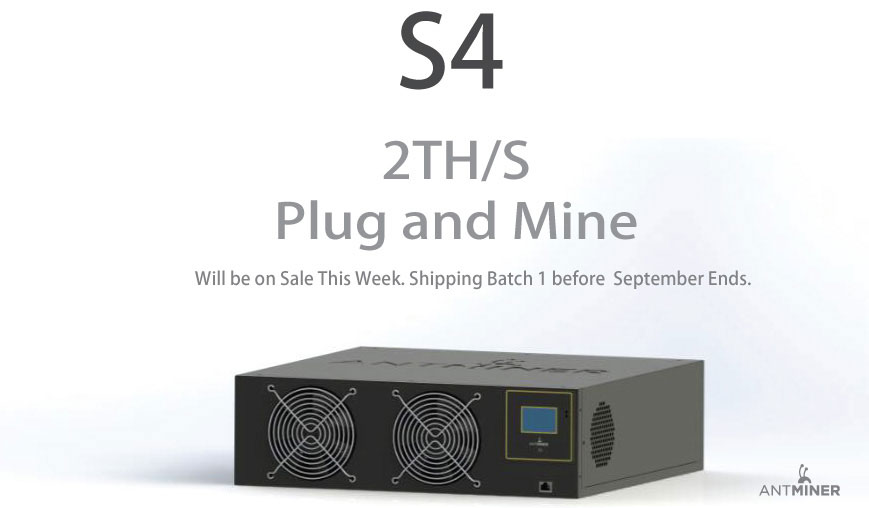 I mentioned this in the last post, so I suppose it's worth going into a bit more detail on the upcoming AntMiner S4 from BitMain. The long and short of it is that we really don't know much about the AntMiner S4, but it will apparently be on sale this week and will ship before the end of the month. That means the hardware must already be validated and running, so that's good to hear, but there are two major things we're still missing.

First, we need to know roughly how much power the AntMiner S4 will use. The previous generation AntMiner S3 is a 28nm chip, but it's only moderately efficient -- 441GH at 340W, or 0.77 W/GH. The AntMiner S4 might simply be the equivalent of five of S3 blades slapped into a single chassis, clocked lower and running at a lower voltage to improve efficiency. If that's the case, we might see 0.6 or even 0.5 W/GH.

The other item we don't know is the price, and given the above speculation I'd say it's likely we'll see the price in the neighborhood of $2000. Anything higher than that is obviously a bad investment -- you can buy a 10GH Hashlet Genesis for $8, basically, so that's the starting point I'm working off. Maybe BitMain will be kind to their customers and drop the price as low as $1500, but that's about the minimum I'd expect to see. We also need to know if it includes a power supply or if you need to provide your own, but the image at least suggests it will be a fully "plug and play" affair.

Considering we have a reasonable idea of the hardware and price, I can at least do a quick estimate of ROI potential. Let's start with the worst-case estimate: you pay $2000, it uses 1000W, and BTC difficulty increases an average of 20% every two weeks; power cost will be a reasonable $0.10 per kWh. We'll guess that you get the hardware in 14 days and start mining immediately. If this "worst-case" happens to be anywhere close to reality, you'd basically spend $2000 and your new ASIC would be too power hungry to keep running in about a third of a year (115 days, give or take). Assuming BTC price stays where it's at, the forecast would be pretty bleak: you'd lose around $1550 (with free shipping no less)!

Okay, that's too grim a proposal, as I think 20% difficulty increase is way too high. But if we take the same core values for price, power draw, and start date we can figure out what the average rate of increase needs to be for you to break even... and it's no less grim! If BTC difficulty only goes up 5.29% each cycle, a 2000GH ASIC for $2000 starting mining in two weeks will basically break even, but that won't happen until early 2016.

I don't think anyone would be willing to buy the S4 at that price, so let's try again and be more optimistic. Let's guess that they can get power draw down to 750W instead of 1000W, and the price is only $1500. Using our more than generous estimates from above (5.29% difficulty increase) you would hit ROI in about six months. A less optimistic forecast of difficulty going up 7.9% on average would leave you with a break even investment in one year.

That's still not looking very good, so let's try once more. What if the AntMiner S4 only costs $1000 and uses 500W? Now we're talking: at 5.29% you'd make ROI in just three months (~95 days), and long-term you could end up earning $1665 off of your $1000, though it would still take the better part of two years. 60% (or more) annual interest would be pretty awesome, so at these (nearly fantasy land) estimates the S4 would be worth buying. Of course a more likely 10% average increase in Bitcoin difficulty would drop you to hitting ROI in four months (~130 days) and after a year your total profit would only be $343.

If you can't tell, we're getting awfully close to the end of the road for Bitcoin ASIC mining investments. If you have one already and it's still profitable, you keep running it, but buying new hardware is looking sketchy at best. The days of purchasing a $500 GPU and having it pay for itself in just a month or so of mining are long past, so short of a major spike in BTC prices we're likely hitting a BTC difficulty plateau that will last a long time and only inch upward slowly as new process technology is developed.
at 2:44 PM