Given the current state of affairs, short of GAW Miners turning into a complete scam and evaporating into the annals of cryptocurrency history, it's difficult to imagine anyone really taking the risk on yet another ASIC pre-order. Will we never learn? Well, maybe we can learn a few things, but for now ZeusMiner is still trying to do the pre-order tango. Here's what we know about their next-generation hardware. 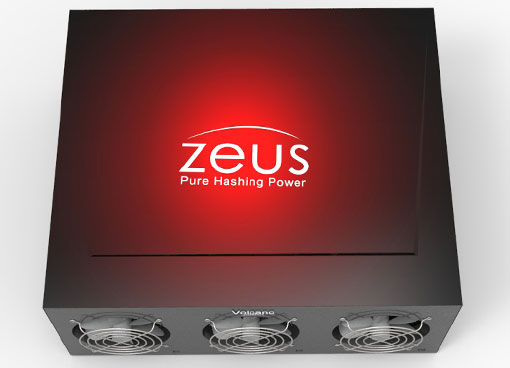 ZeusMiner has announced their third generation Scrypt ASIC, the ZeusMiner III, and along with it comes their next generation of hardware. The star of the show is the Volcano, and they're taking pre-orders for the device right now. The specs are at least good on paper, with a promise of 300 MH/s and a power draw of only 1000W. The price is actually pretty good as well: $1699 per ASIC -- and if you're one of the first 500, you'll get another $100 off the price and only pay $1599 (plus shipping, I would assume.) You also get 5MH of "free" mining on the ZeusMiner Cloud.

If you do the math, that works out to $5.33 per MH ($5.66 per MH if you aren't part of the first 500 orders), and you can do whatever you want with the device when it arrives -- you're not locked into cloud mining on a set list of pools. Obviously this would be an awesome product to own today, as it would pay for itself in about a month. The problem is that the current target shipping date is the end of Q4 2014, which means you're looking at late December -- assuming it doesn't slip by a few months, which has happened so many times with cryptocurrency ASICs that it hardly bears mention at this point.

What will things look like come January 2015, which is likely closer to the start date for mining? Predicting the future is always sketchy at best, but let's quickly check the past few months. The difficulty of LTC mining increased about 13% since last month (August 15 at 29290 to September 15 at 33030), but the previous several months saw a far faster ramp: July 15 was 20233 (a 45% increase to August), June was 10886 (86% increase that month), and May was 7740 (40% during the next month). That means the average rate of increase per month is about 44%, but that's perhaps not very meaningful as LTC changes difficulty every ~3.5 days. That means on average the rate of change is "only" 4.3% every adjustment period, so let's take that as a "worst-case" scenario.

If we continue to see such a fast ramp in LTC (Scrypt) difficulty, we're looking at a potential starting LTC difficulty around Christmas of 111,000. At the current prices, your $1600 investment would end up losing $1000 before the ASIC is no longer worth running. Of course, this is pretty much not going to happen, as 300MH per 1000W is far more efficient than a lot of Scrypt ASICs and many older/slower ASICs will have to stop mining before we get to a difficulty of 100K or more. Even the GAW Vaultbreaker is only looking at 750MH per 1500W or so, which means it's about 66% more efficient -- assuming of course that both ASICs hit their targets.

So let's go with a more conservative rate of increase, like maybe just 2% per cycle on average. In that case you're looking at about 1.5 years before the hardware is no longer profitable to run, and you could turn a $1600 investment into a $1600 gain ($3200 total), give or take. The problem of course is that you still have to take the risk and invest $1600, and there are other alternatives.

Right now, $1600 will buy you 76MH worth of Zen Hashlets from GAW Miners. At today's rate, you'd make around $16.50 per day. That could mean you'd have the Hashlets paid off right around the time (best-case) that the Volcano launches, but it would be foolish to expect the Zen Pool to continue paying anywhere near 0.000625 BTC per MH. The problem is that we don't really know what to predict for Zen Pool, as it's "secret", but maybe it's just LTC plus a 50% subsidy from some source. If that's the case, we can actually use the above rate of difficulty increase to estimate how much a Zen Hashlet will make during the coming three months.

Let's assume that instead of 50 LTC per block, a Hashlet gets you the equivalent of 75 LTC per block (to account for the Zen Pool "bonus"). 76 MH will cost $6.08 per day in maintenance fees, and unfortunately at a 2% rate of increase the Zen Hashlet would still be dead (worthless) in 189 days, give or take. But GAW has gone on record as saying that they will ensure Hashlets are always profitable to run, which means at some point they will have to lower the maintenance fees. At $0.06 per MH, you could "profitably" run Zen Hashlets for 245 days or so before they become too expensive to use, but you still wouldn't break even with a 2% per cycle rate of LTC difficulty increase. No, you would need a cost of $0.04 or less per MH to hit ROI -- but basically GAW is again promising exactly that (and more).

Ultimately, the above is all just guesswork. LTC difficulty won't increase at a constant rate, just like BTC difficulty. New hardware will continue to be developed as long as it's profitable to do so, and that may or may not be the case in another year or two. If it becomes unprofitable to develop new hardware, you can also expect difficulty to stabilize, or even take a dive. Basically, it's all one big mess of inter-related variables. Miners will stick with a cryptocurrency and secure the network as long as it's worth their time to do so, and if it's not they'll seek greener pastures and difficulty will drop until it becomes worth mining again.

My general advice then is this: if you don't like GAW Miners for whatever reason (and there are a few options, including the "too good to be true" attitude), what you should try to get is the most efficient ASIC possible for the lowest price possible. Alpha Technologies and KnC are both promising decent efficiency, but neither one has successfully launched a Scrypt ASIC so far, and their prices are far higher. ZeusMiner on the other hand already has two generations of Scrypt ASICs, with a third now in development, so I'd expect their forecast to be reasonably accurate. 300MH at 1000W by December is definitely achievable, and 3.3W per MH should stay profitable on Scrypt mining for a long time. If nothing else, it might be worth hedging your bets by purchasing a Volcano, but that would mean you have $1600 available for such ventures. Personally, I think I'll sit this one out, mostly because the theft of several thousand dollars worth of BTC still stings.
at 10:45 PM