Among the chaos of the past week, something else sort of slipped by that people only peripherally noticed. Along with the dropping payouts from Multipool (Multi Hashlet), Zen Pool and Zen Hashlet payouts also took a major hit. For a long time they were paying 0.0006 BTC per MH (give or take), which was almost twice the rate from straight LTC mining; starting last week the rates have dropped and can often be around the level of the other Hashlets (or even less on some days).

Yesterday (10/19) for example, the Zen Hashlet rate was 0.00035783 BTC, which is actually less than the rate of Multi Hashlet for the day. LTC Pool is even lower, and is now paying about what you'd expect from straight LTC mining: 0.00028424 BTC per MH for the day. The rates from all of the other Hashlets have fluctuated quite a bit, but up until now Zen Hashlet was pretty constant.

I haven't purchased any of the other Hashlets (I have some Primes from my Lightning X6 conversion, but otherwise all I own is Zen Hashlets), but most of those are publicly available anyway. So let's look at the last week of payouts from Zen Hashlet and the other Solo Hashlets -- this is based on my ~350MH of Zen Hashlets: 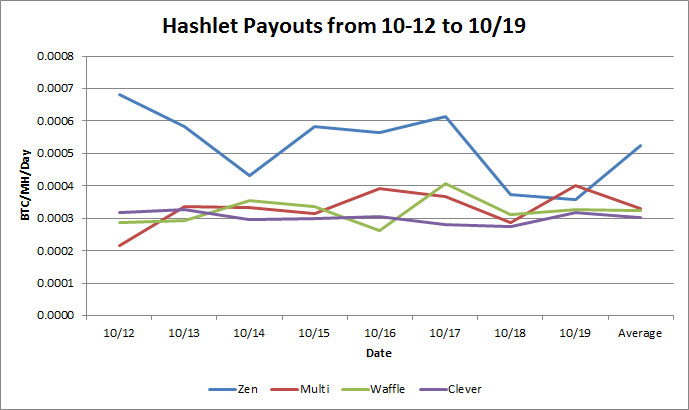 The interesting thing is that, based on my own personal results (which may not be the same as others, though I haven't been doing anything with the Zen Hashlets other than mining), it looks like the average profitability of the last week for Zen Pool is 0.00052 BTC/MH. If you're wondering, for the first twelve days of October, the average profitability of the same Hashlets was 0.000659 BTC/MH, so Zen Hashlet profitability dropped 21% this past week. Second place goes to Multipool (0.00033 BTC/MH) and Waffle is basically the same (0.000323 BTC/MH). The least profitable Hashlet right now is Wafflepool (0.000303 BTC/MH), but all three are close enough that I wouldn't draw any long-term conclusions based off just one week of data.

Okay, with the above in mind, let's take a look at ROI based on the seven day average payouts from last week. Note that Hashlet Prime can do Double Dipping, but you're no longer getting 1.5x Zen Hashlet as LTC Pool and Zen Pool have decoupled. If you use Zen as the primary and Multi as the secondary, on average you'll get about 0.00069 BTC/MH. So how do the Hashlets look now?


Well, I suppose it could be worse. ROI for Zen Hashlet remains at roughly 150 days with the reduced price. Interestingly, Hashlet Genesis actually comes in second place overall, with an ROI of 227 days (though I'd expect profitability to drop a bit more with Genesis compared to the Scrypt ASICs). Third place overall is now Hashlet Prime, which of course can't be purchased through GAW, but you can currently find them for $40-$41 on the Hash Market (which would actually put them into second place with an ROI of 222 days).

Given the similar performance from Multi Hashlet, Waffle Hashlet, and Clever Hashlet, the base price has a big impact on the ROI -- Multi ends up the "best" at 322 days, with Waffle coming in next and Clever placing a distant last. If you buy on the Hash Market, you can get substantially lower prices -- basically a lot of people are pulling out of the Solo Hashlets. Going prices right now are $11.50 for Clever Hashlet, $12.60 for Waffle Hashlet, $10 (sometimes less) for Multi Hashlet, $16.22 for Zen Hashlet, and $6 for Hashlet Genesis.

Ultimately, even at the lower market prices Clever and Waffle Hashlets have an ROI of close to a year (at current rates), which is more than I'd trust any of the Bitcoin companies to stay in business to be frank. Some will of course stick around, but there's a reason so many Bitcoin startups have folded in the past couple of years, and with a track record of less than six months and numerous bugs still cropping up, GAW certainly isn't a "sure thing" right now.

So if now GAW then who would be the best bet? Honestly, I don't know. LTCGear had a great sale, so good that it was temporarily out of stock; the ASIC share1K6X is back now, but the coupon is gone so you're looking at $1805 for 160MH for one year. It's a bit better ROI than Zen Hashlet (about 105 days best-case), so it's probably your best bet. Zeushash meanwhile is charging $15.99 per Scrypt MH, so slightly more than GAW, with maintenance fees of $0.059 per MH (slightly less than GAW). As far as I can tell they're just paying out straight LTC mining rates, so ROI is currently looking at 330 days.
at 4:24 PM