I've been dabbling in cryptocurrency for nearly six years now. Recently, I had a discussion with someone regarding an old article where I declared GPU mining dead. It's definitely not dead, though you have to know what you're getting into before you start. But here's an updated look at the subject of making money with cryptocurrencies.

The biggest issue is time -- things don't stand still, prices fluctuate, and you're going to need to stick with mining for a good long time before you're in the black. I'm not talking decades or anything like that, but volatility and your approach to selling/hoarding will play a role, along with some luck.

Mining on the other hand won't pay out hugely, particularly if you're not mining and hoarding (and eating the power costs). I know from personal experience that roughly $10,000 worth of optimal mining hardware purchased around the same time would have generated somewhere between $12,000 and $16,000 during the past 14 months... but it would also cost about $4,000 in electricity, never mind the noise and potential upkeep.

Here's the thing. That $10,000 investment in mining hardware could be sold today for about $7,000. So where the risk with buying straight into cryptocurrency is 100 percent -- you could potentially lose everything -- with mining you've always got the hardware. But the risk if you buy BTC is arguably a lot lower, because BTC isn't going away. Worst-case, it might drop in value by half. But mining can be a lot more fun that just buying Bitcoin, and some people already have a fair amount of extra hardware available.

With that preamble out of the way, here's the current pricing and equipment needed to build a mining rig with support for up to six GPUs.

2x4GB DDR4 memory (no need to get higher performance RAM)

120GB SATA SSD (because I hate waiting for HDD to reboot)

Use a wire shelf for your case (much cheaper and easier, and cools well)

Don't forget: Zip ties, power meter, and a surge protector. These should be self-explanatory, but you'll want to know your real power draw (from the wall), and surge protection is a great idea.

Now, the practical experience of piecing it all together. First, put a piece of non-conductive material under the motherboard (wood will suffice, though it's flammable, so....) If you want to install some mounts for the motherboard, that's not a bad idea, but it's not required -- it just keeps the board from sliding around.

If you don't know how to install an OS and the rest of the hardware (PSU, SSD, RAM, etc.) you should probably stop right now. It's not particularly difficult, but if setting up a new PC scares you, go search out some videos on the subject and get comfortable with that before investing a bunch of money into mining hardware.

For the GPUs, hang them from the top shelf and secure them with Zip ties. Use the PCIe risers, but make sure to skip the included Molex to SATA power adapters -- just use a Molex connector direct from the PSU. You might also want to get a few extra risers, as sometimes one or two are bad/nonfunctional. Keep a moderate amount of space between the GPUs so they all get plenty of fresh air.

I'd get the system up and running with a single GPU first. Whether you use Windows or Ubuntu or some other flavor of Linux is up to you. I tend to use Windows because I'm most familiar with that OS and I know how to get all the tools for modding and flashing the VBIOS, mining, etc.

Once the system is running, install your mining software (Nicehash is easy and pretty good). If you want to be thorough, start with one GPU and test all of your riser cables and PCIe slots -- make sure they all function properly. This will require a bunch of shutting off and restarting, obviously, but it can save you some headaches in the long run. Once you've verified all six risers and slots are working, you can hook everything up so that it looks something like this: 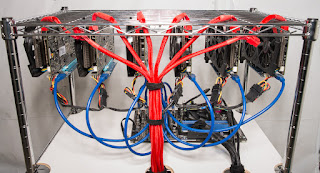 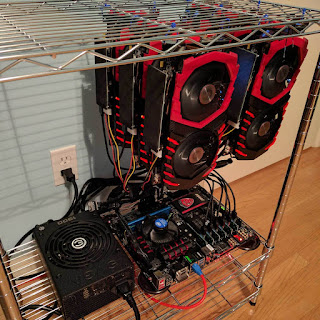 Both of those are pictures from the web, with far nicer cabling than I usually do. If you want to do multiple miners, so two systems with six GPUs each, that's entirely possible. Note that you'll want to have sufficient power (and cooling for the room!) and that usually means not putting more than two rigs on a 15 Amp circuit.

To keep power down, and help avoid killing your GPUs, for RX 470 4GB cards I recommend doing a VBIOS flash (Google it if you don't know how) that sets the RAM clock to 1900-2000MHz, and limits the GPU core to 1100MHz. You might want to adjust the fan speeds as well. That should keep each 470 at around 125W. (Feel free to ask me for more details if you need help.)

With everything assembled, your actual performance and earnings will vary depending on the market, the hardware you selected, and what you plan on mining. I use Nicehash because it will switch algorithms automatically and pays out in BTC, which is 'safe'. Others prefer mining Ethereum or ZCash (or whatever the hot new coin is) directly. Your choice. Generally speaking, here's what I would expect for performance/power use, in order of increasing ROI time.

As with any predictions, take the above as estimates only. If the cryptocurrency market does well, you might hit ROI in six months. If it does poorly, it might take two years. Your power bill and computer parts are also tax deductible, if that helps -- and you'll have a huge power bill if you build out six of these rigs, I can promise you that!
at 10:55 AM